Persons with disabilities often face a lack of accommodation, support and funding, as well as experiencing widespread bullying and exclusion, according to the Canadian Human Rights Commission. Accessibility and inclusion can benefit people everywhere, whether that’s in schools like the University of Winnipeg (U of W) or workplaces like Pride Winnipeg.

Julie Chapko, the accessibility co-ordinator for Pride Winnipeg, says that accessibility is important because it removes barriers that have been created in society.

“Being accessible and inclusive allows us to celebrate individuality and embrace differences, but most importantly, it provides everyone with amazing solutions to everyday obstacles that you might not otherwise have thought about,” Chapko says.

These everyday obstacles can include daily tasks like sweeping, driving or cooking.

According to UNESCO guidelines, “inclusion has to be seen as a never-ending search to find better ways of responding to diversity.”

An example of the never-ending search is with Pride Winnipeg.

Chapko says that accessibility and inclusion mean everyone has the right to experience Pride, to enjoy the events and feel safe and supported while taking part. Chapko also says they ensure that all venues, sidewalks and festival grounds are accessible.

“Once we've accomplished a standard for the physical aspects, we then want to engage with other communities, gather their input, work with them to solve problems and make them part of the solutions,” Chapko says.

There are many ways to make institutions more accessible and to remove barriers for various groups. People with chronic illnesses could benefit from being notified about work to be done and from working in teams. People with varying levels of vision should have hard or digital copies of materials, according to the Blind New World website. The use of gender-neutral language can reduce barriers for those of diverse gender and sexual orientations.

The Accessibility Manitoba website states “Manitoba is committed to becoming an inclusive society. The Accessibility for Manitobans Act (AMA) outlines a clear and proactive process to identify, remove and prevent barriers in key areas of daily living.”

Inga Johnson Mychasiw, director of student support services at the U of W, says that AS staff support the AMA in the work they do every day. 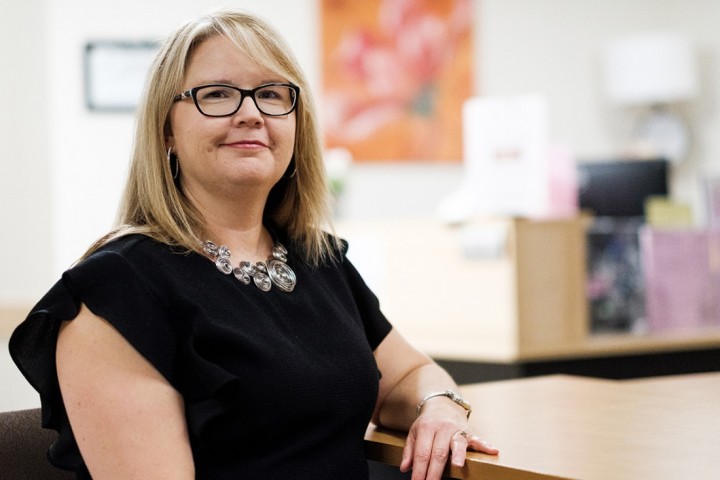 Inga Johnson Mychasiw is the director for student support services at the University of Winnipeg.

“Staff are members of the Accessibility for Manitobans Act Committee on campus, where they actively participate in the work we are doing to ensure the university is in compliance with the act … They have participated in training offered by the Disability Issues Office of the province of Manitoba and promote accessibility on campus on an ongoing basis,” Johnson Mychasiw says.

According to Inclusion BC, historically, it was a practice to label people with developmental disabilities with derogatory terms and place them in institutions or in segregated schools or workplaces where they didn’t have a lot of rights. People with disabilities would be forced to live in group homes away from their friends and family, sometimes for their entire lives.

In 1996, British Columbia became the first province to close all of its large, segregated institutions for people with developmental disabilities. Today, people who were once segregated are now integrated into society and participating as citizens in their communities.

With AS, students can request academic accommodations but still be part of the everyday things happening on campus. Students with a disability – like cerebral palsy, for example – may not be able to take tests or exams under the typical classroom settings, as they may not be able to write fast enough or legibly.

Johnson Mychasiw says AS supports reducing the stigma or negative stereotypes that can be associated with persons with disabilities through positive messaging. AS tries to make an awareness for the work that they do with sessions that are developed and facilitated on the U of W campus.

Johnson Mychasiw says the U of W supports the idea that everyone will benefit if barriers to accessibility are reduced.

“Students with disabilities can face a range of barriers in their lives and in their educational pursuits. These may include attitudinal, communication, physical and transportation barriers, among others. Accessibility Services tries to collaborate with students, faculty and staff to provide accommodations and reduce the barriers our students face in their studies and on campus,” Johnson Mychasiw says.

Students with various forms of disabilities have another option, which is working with AS at the U of W. They work with the students, faculty, and staff, AS and Deaf & Hard of Hearing Services (DHoHS) to create and promote growth of accessible learning environments, so that students with disabilities and medical conditions have the chance and options to participate fully in all parts of campus life, the AS website states. 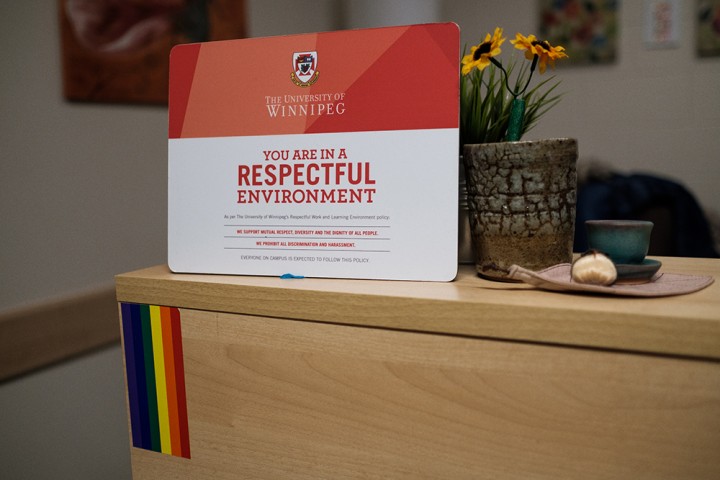 A sign displayed at the University of Winnipeg's Accessibility Services office.

Johnson Mychasiw says “students may self-identify as a person with a disability and/or want to explore options for services from AS. If so, they can contact AS and request an intake appointment. In order to receive services from AS, medical documentation which includes functional limitations and accommodation needs is required, but the name of a student’s specific diagnosis is not.”

Some examples from the website that AS can helps students with are  “anxiety/depression, attention deficit/hyperactivity disorder, blind or low vision, chronic medical condition, deaf/hard of hearing, learning disability, physical/mobility or a temporary disability.” 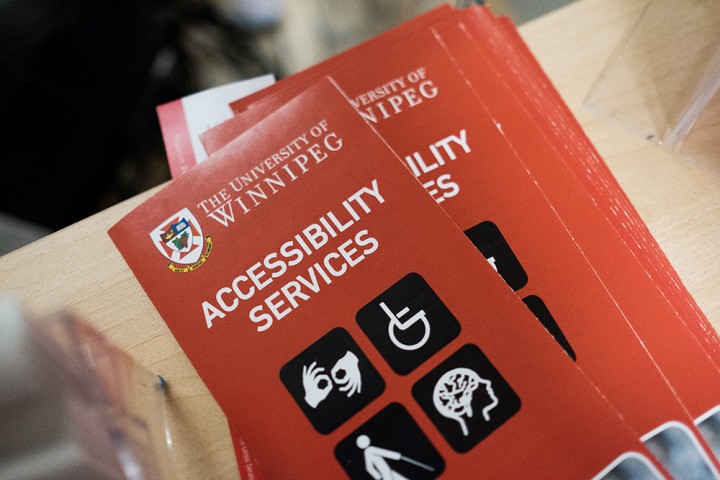 Brochures at the Accessibility Services office.

The Canadian Hearing Society (CHS) says barriers like not being able to enter an establishment because there is no ramp can be obstacles. They can make it difficult or impossible for people with disabilities to do things able-bodied people might take for granted, like going shopping, working or taking public transit.

“When we think of barriers to accessibility, most of us think of physical barriers – like a person who uses a wheelchair not being able to enter a public building because there is no ramp. The fact is there are many kinds of barriers. Some are visible. Many are invisible.” the CHS website states.

Examples of invisible barriers are poor lighting for people with low vision, parking spaces being too narrow for someone with a wheelchair or a hiring process that is not inclusive of persons with disabilities.

U of W Accessibility Services works with universal design as another means to aid students with various forms of disability.

The university refers to the City of Winnipeg’s definition of universal design, which is:

“The practice of designing environments, information, communications and transportation that can be efficiently used by people with a wide range of abilities operating in a wide range of situations. It is about putting people first, providing the same opportunity for accessing services, landscapes, buildings and information to young and old, with or without disabilities regardless of life circumstances to the greatest extent possible.”

Deborah Stienstra, formerly of the University of Manitoba and currently working at Guelph University, writes about inclusive design in the book About Canada: Disability Rights. 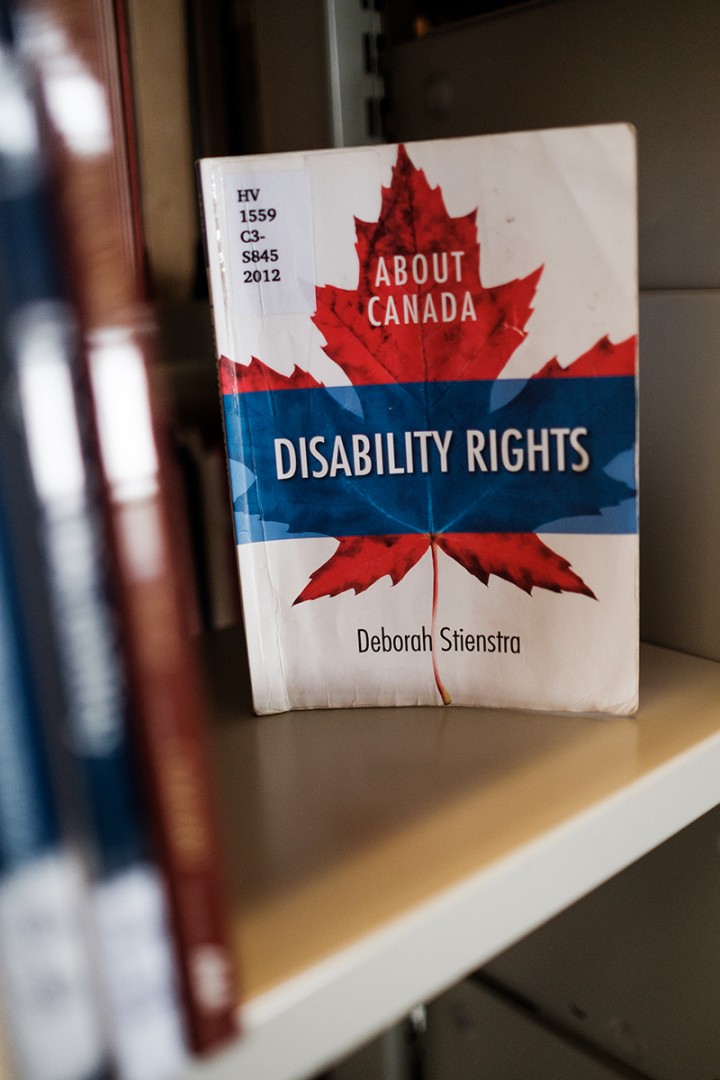 Deborah Stienstra's book Disability Rights at the U of W library.

“Canadians with disabilities face barriers in many parts of society as a result of environments – physical, natural and technological – that have been built to accommodate able-bodied people," Stienstra writes in chapter four.

An example of  an accommodation for able-bodied people that doesn’t always help people with disabilities, especially those with vary levels of sight are lights turning on as someone would  be entering a room.

“Electrical lights in a room give access and support to those with sight but are irrelevant to those who are blind. We as a society accept the need for lighting and do not see it as an accommodation. Yet we resist accommodations or universally designed initiatives that would bring the same sense of inclusion for people with disabilities,” Sientra writes.

Accessibility and inclusion don’t just pertain to people with physical disabilities, but also to those with chronic illnesses.

The Manitoba government website defines chronic disease as an overarching term used to define a group of people with different conditions that have existed for a long time, such as Type 2 diabetes, heart disease and stroke, among other medical complications.

Susan Wendell, a professor at Simon Fraser University, writes about persons with chronic illnesses in an article in the book The Disability Studies Reader.

“In order for people with impaired energy to participate as equals, the relationships between time, energy and power will have to be discussed openly and negotiated,”  Wendell writes.

As someone with chronic migraines, Blaire Trelinski says her experience has affected both how she learns and works, as well as her ability to make plans and stick with them.

“I feel a lot of personal pressure due to what I say I am going to do, but there is no working through migraines, so sometimes I’ve had to to learn to step back and say ‘I can’t,’” Trelinski says.

Since there are no external indicators of a migraine for Trelinski, she says an accommodation is to just believe her when she says she’s had a migraine.

When talking about inclusion and accessibility, it is important to remember groups of people like those of the LGBTQ+ community and the use of pronouns for people of diverse gender identities.

According to the Ontario Human Rights Commision (OHRC), “Gender identity is each person’s internal and individual sense of being a woman, a man, both, neither, or anywhere along the gender spectrum. Personal names and pronouns are two fundamental ways we express gender and how others perceive our gender. Traditional gender pronouns (she/her, he/him) do not fit everyone’s gender identity.”

Pauline Greenhill, a women and gender studies professor at the U of W, says pronouns are important.

Greenhill says for her students in class, using pronouns raises an awareness in all students. Greenhill began getting students to put their pronoun on their classname card because of a suggestion by a colleague, Sharanpal Ruprai.

Johnson Mychasiw says the U of W doesn’t have a policy on pronoun use but that it is respectful to ask about an individual's preferred pronouns and then use them.

The University of Waterloo Centre for Teaching Excellence says that trigger warnings can be defined as “a statement made prior to sharing potentially disturbing content. That content might include graphic references to topics such as sexual abuse, self-harm, violence, eating disorders, and so on, and can take the form of an image, video clip, audio clip, or piece of text.”

Certain content can have an impact on the well-being and academic performance of students who have experienced some form of trauma. Some students may benefit from a warning on certain topics, so they can prepare to participate in discussion. Giving this warning can give students control over their learning, the University of Waterloo says.

Greenhill says that including trigger warnings is important. She says that she wouldn’t call them trigger warnings though (as they have a certain militaristic connotation or metaphor attached). She would just call it an awareness.

The University of Waterloo says that trigger warnings don’t mean that students can exempt themselves from finishing coursework. The hope is the student that is concerned about being re-traumatized is honest and privately informs the professor of their concern. The student and professor would then find an accomodation for the student.

Everyone can benefit from accessibility being a large part of society at every level, whether it be smooth surfaces, accessible buttons for doors or having digital and hard copies of documents available.