The University of Winnipeg’s Wesmen women’s soccer team hopes to become stronger and make the playoffs this year. Sept. 8 will be their first test, as they face off against the University of Saskatchewan Huskies for the season opener.

Gelsy Vanderhooft, a second-year defender on the Wesmen team, says she’s excited for the game with Saskatchewan.

“They’re a really strong, talented team. The games between the Wesmen and Saskatchewan are usually pretty close,” Vanderhooft says.

Last year, the Wesmen missed the playoffs by one point in their last season, and making the playoffs would be a first for the team.

The Wesmen women’s soccer team plays in the Prairie Division of the Canada West conference of U Sports (formerly Canadian Interuniversity Sport). The team placed seventh out of eight teams with 14 points. The Wesmen were three points ahead of last-place Lethbridge Pronghorns, one point below the sixth-place Manitoba Bisons and 13 points below the second-place Saskatchewan Huskies in the 2016-17 season. 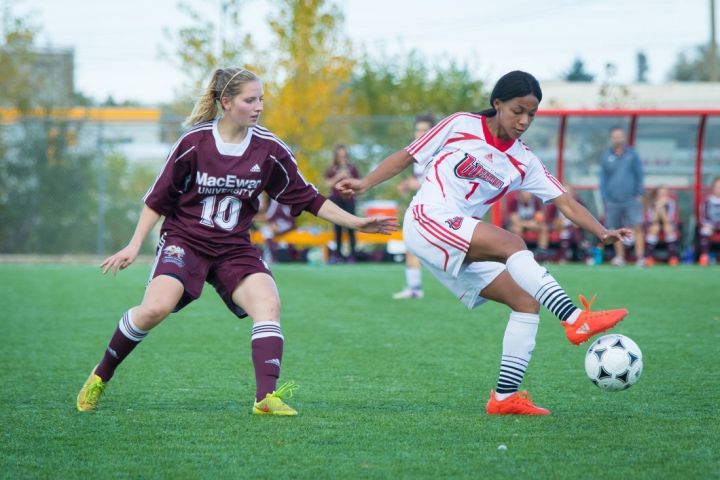 The University of Winnipeg’s Wesmen women’s soccer team hopes to become stronger and make the playoffs this year.

Wesmen head coach Amy Anderson describes the Huskies as one of the top teams and notes that they made it to the nationals last year.

Vanderhooft saw the Huskies play at the pre-season tournament and felt they did well.

However, Anderson says the Wesmen are mentally prepared for the season opener and are a resilient team.

“Last year, we ended off on a good note where we tied BC and UVic (University of Victoria) in our last weekend,” she says.

The coach says the plan this season is for the team to take it “one thing at a time, one game at time.”

Anderson says she noticed the team made progress each game during a pre-2017-18 season tournament in Regina, and she believes a strong sense of camaraderie will help the Wesmen.

“This team has learned to play for each other, and that’s important. You don’t go out there and play for your coach or yourself. You play for the teammates on the field,” she says.

She describes the Winnipeg squad as a very young team, in which third-year players are seniors.

The spirit of camaraderie, she says, was on display during a tryout camp, where third-year players would help clean up and carry soccer balls. Anderson says, on other teams, you may see only first-years carrying the balls and cleaning up, but that type of seniority-based hierarchy is not a part of the Wesmen team.

The season opener between the Winnipeg Wesmen and Saskatchewan Huskies will take place in Winnipeg at the Ralph Cantafio Soccer Complex (900 Waverley St.) at 7p.m. on Sept. 8.