For anyone who spends a lot of time online, it may seem that dogs – actually, make that doggos – reign supreme. A love of canine friends has inspired groups like Dogspotting on Facebook, who've now accrued over 650,000 likes, and now have their own app. An alternate language, known as DoggoLingo or doggo-speak, has sprung up to help describe the thoughts and behaviours of the dogs pictured.

It's almost as if there's a cheerful alternate world where dogs are puppers and doggos, bark is bork, and those critters unlucky enough to be startled are simply “doing me a frighten.”

While it's pretty easy to love a doggo online, it may be a little harder to keep puppers active, socialized and even housed in real life. Winnipeg may lag behind other urban centres in many measures of pet-friendliness, but some locals are taking steps to make this a more dog-friendly and dog-loving city.

On Saturday, Sept. 2, the City of Winnipeg's Animal Services opened up two of the citys pools – Happyland and Bruce Park – to dogs for the afternoon. The dog-focused day was inspired by a similar event held last year in Saskatoon that received widespread media coverage.

“A bunch of people at Animal Services saw that same news and were like, ‘why don't we try that here, in Winnipeg,’” Leland Gordon, COO of Animal Services, says. 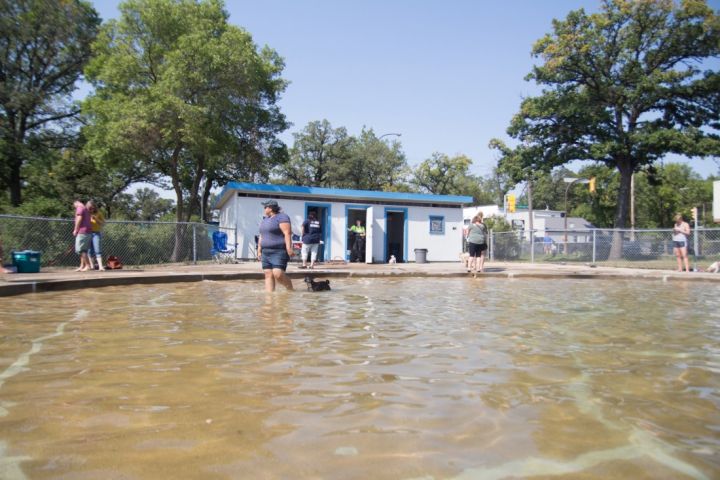 Frida, a water-loving Boston terrier, follows one of her humans around the pool. A ball hidden in a shorts pocket inspired this rare display of obedience.

When the smaller dog window came to a close, Marta Alphonso's Boston terrier, Frida, was the last one in the pool.

“She loves swimming. Its her favourite activity. She can actually go for hours,” Alphonso says. “And its not common for Boston terriers to love water that much, but she has webbed feet, like she was made for it.” 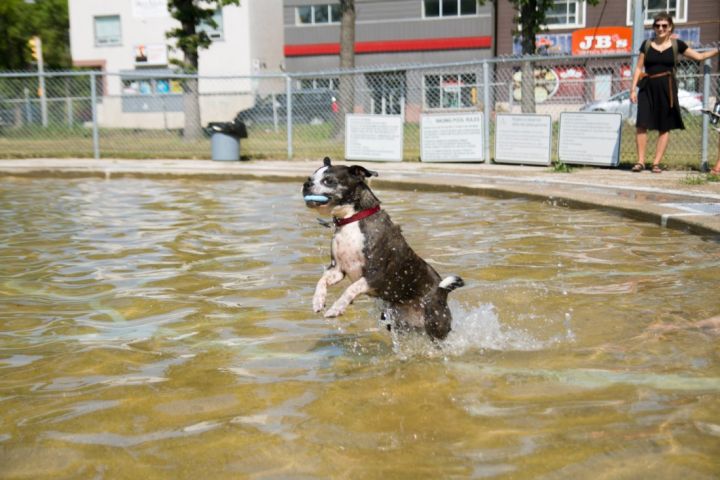 Frida, the Boston Terrier has webbed-feet.

Alphonso used to take Frida around with her to many places in the city but found that she wasnt welcome everywhere.

“Youll see signs on doors, like pets are not welcome. I know in other cities they can be welcome on patios,” Alphonso says.

Some shops, like Tiny Feast on McDermot Avenue, merge their love of puppers with their business plan.

“We are a dog-obsessed store,” retail manager Stacey Paton says. “Weve only ever had super positive experiences, having dogs in the shop. We love it.”

Patons own experience as a dog-owner (most staff at Tiny Feast have dogs, she says) inspires their open-door-to-dogs policy.

“When I'm with my partner, one of us stays outside with the dog while one of us does a lap of somewhere, and then the other one goes in, and we have to take turns,” Paton says. “So it's nice that everyone can come (into a shop).” 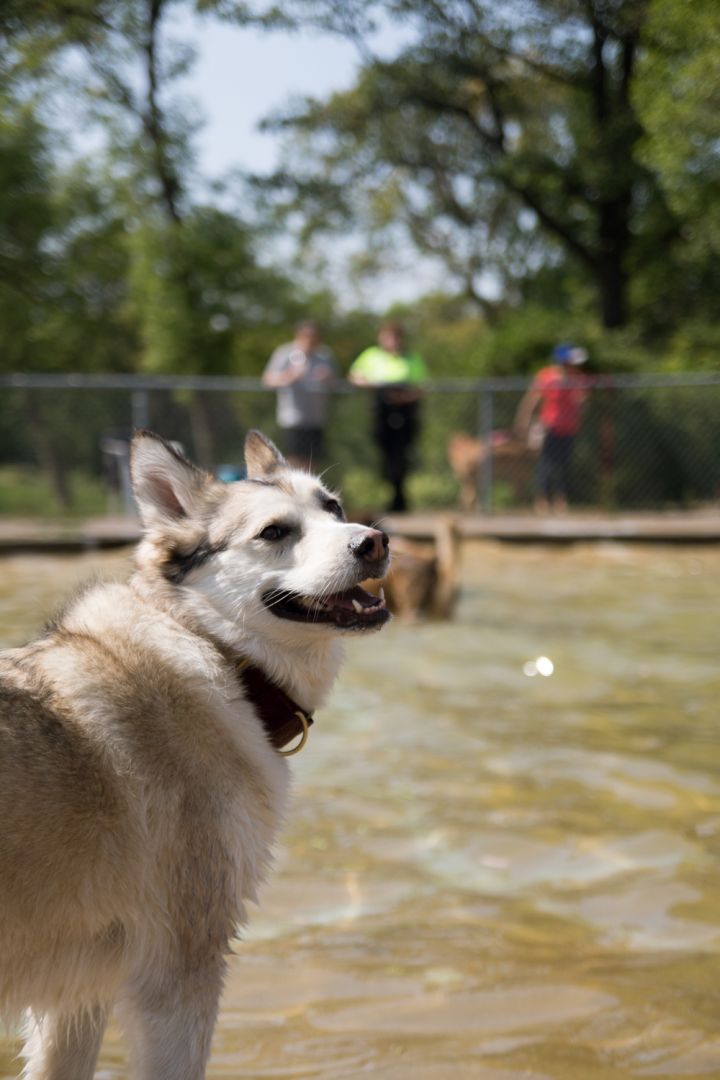 A happy pupper enjoys a day out at Happyland park wading pool on Sept. 2.

Bringing a doggo home can lead to another set of challenges within Winnipegs rental market. For some landlords, it can come down to perception of the critters potential impact.

“I lucked out with my landlord letting me have the dogs,” Connie Sinclair says. “With any animals in general it can be hard, they can be like theyre going to destroy the place. It's not any worse than some of the humans (who might) destroy places.”

Sinclair adopted her dog, Daisy, from Winnipeg Pet Rescue four years ago and brought her out to enjoy the pool day on Sept. 2.

On their website, the Winnipeg Humane Society keeps a list of pet-friendly housing options, as well as a request for the public to submit new locations they're aware of.

Just a few hundred kilometres east, tenants should technically have less issues housing themselves and their pets. Ontarios Residential Tenancies Act states that, with a few exceptions, rental agreements can't disallow pets. While there are some loopholes (the Act applies to tenants, and so until an agreement is signed, prospective tenants may face pet discrimination), the Act provides better protection for animal lovers than Manitobas.

In 2010, an attempt to create a similar law in Manitoba, nicknamed “Fluffy's law,” was opposed by landlords and ultimately failed to pass.

Locally, Winnipegs pet bylaw was changed in 2015 to amend the number of dogs a person could live with. Previously, the total was six animals, three of which could be dogs. Now, Winnipeggers can have up to four dogs, and six animals in total.

“Winnipegs getting better, but when we look at some of the other cities, it's just so much more dog-orientated,” Sinclair says. She's set up a pool in the backyard for Daisy but would like to see more water-based activities for dogs in the city at pools and splash pads.

“There's (a splash pad) right now at Peanut Park in the North End that would have been perfect,” Sinclair says. “Hopefully in a couple years, we'll have more of these around the city for dogs, or at least do this a couple of times a summer, not just at the end of the pool season.”

Outside of pool day, the main recreation options for active puppers are local dog parks, many of which are located near the edges of the city.

“Our dog parks are quite good. Maple Grove is my favourite. Unfortunately, I had to move, so Charleswood became the closest,” Paul Turner says. Turner brought his yellow Labrador, Wilson, out to the Happyland Outdoor Pool to play with some new friends.

“This is his best day ever,” Turner says.

For swimming, he'll sometimes take Wilson to Maple Grove Park to swim in the river, though “that requires a bath afterwards.”

Alphonso drives Frida to the Winnipeg Beach dog beach to get a swim fix and also takes her out to various parks and fields around St Boniface. Sinclair says she takes Daisy to Little Mountain Dog Park, though she noted the water there was somewhat green and smelly on their last visit.

Each dog (and human) seemed to be able to find a favourite park, but are there enough parks for all of Winnipegs dogs?

In March 2017, CTV News reported that Winnipeg had one licensed dog for every 13 people in the city. Of the nine major Canadian cities they measured, this is second only to Calgary (who had one dog for every 12 people). The City of Calgary provides over 150 off-leash areas for their puppers. In Winnipeg, there are 10, and soon, there will be 11.

An off-leash dog area at Bonnycastle Park is currently under construction and slated for completion this fall. A downtown option for doggos has been highly anticipated by many pet owners.

“We're lucky enough that we have a vehicle, we can drive to Charleswood, or can drive to Maple Grove, to let him run around,” Paton says. “If (a dog park) would be somewhere that we could walk to, that would be great.” 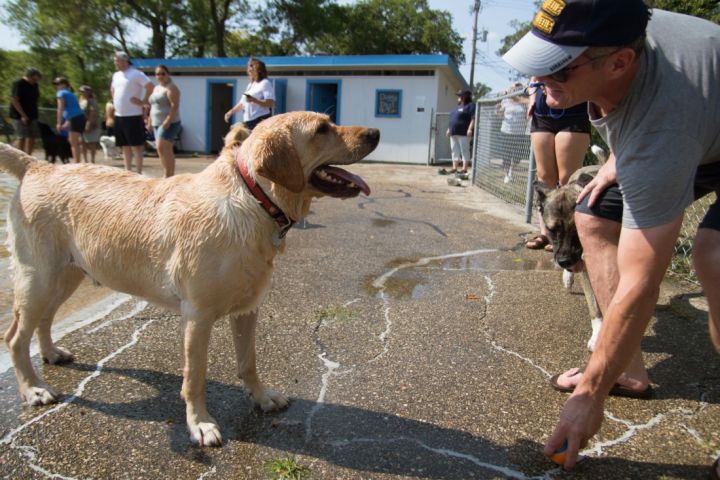 Wilson waits for Paul Turner to throw his ball back into the pool.

For campus-bound animal lovers, the University of Winnipeg Students Association (UWSA) is continuing their monthly dog appreciation event, now re-named Doggo Days. On the last Thursday of the month from 11 a.m. to 2 p.m., volunteers bring their friendly grown puppers to the Bulman Centre MPR, where students, staff and faculty are welcome to hang out with them.

“I think that especially for folks that live in residence or that are maybe living in apartments for the first time in their lives, not having a pet to see and love is a little bit difficult,” Laura Garinger, UWSA president, says.

“Part of it was, in the beginning, trying to help people de-stress and kind of break up their day a bit, and have something to look forward to in a month, even if it is something as simple as seeing the dogs.”

Garinger stresses that these arent trained therapy dogs. The UWSA pairs with local rescue organizations to bring adopted dogs in with their owners.

“I think a lot of people might have negative connotations with rescue dogs. (There are) definitely some who might be breeds that are stigmatized already, and being able to hang out with them is really nice,” Garinger says.

While she says it would be great to have dogs around more often, Garinger appreciates the time and effort put in to bring the dogs downtown, and supervise their interactions with so many new friends.

“Sharing your dog is very nice. It's a very good thing to do.” 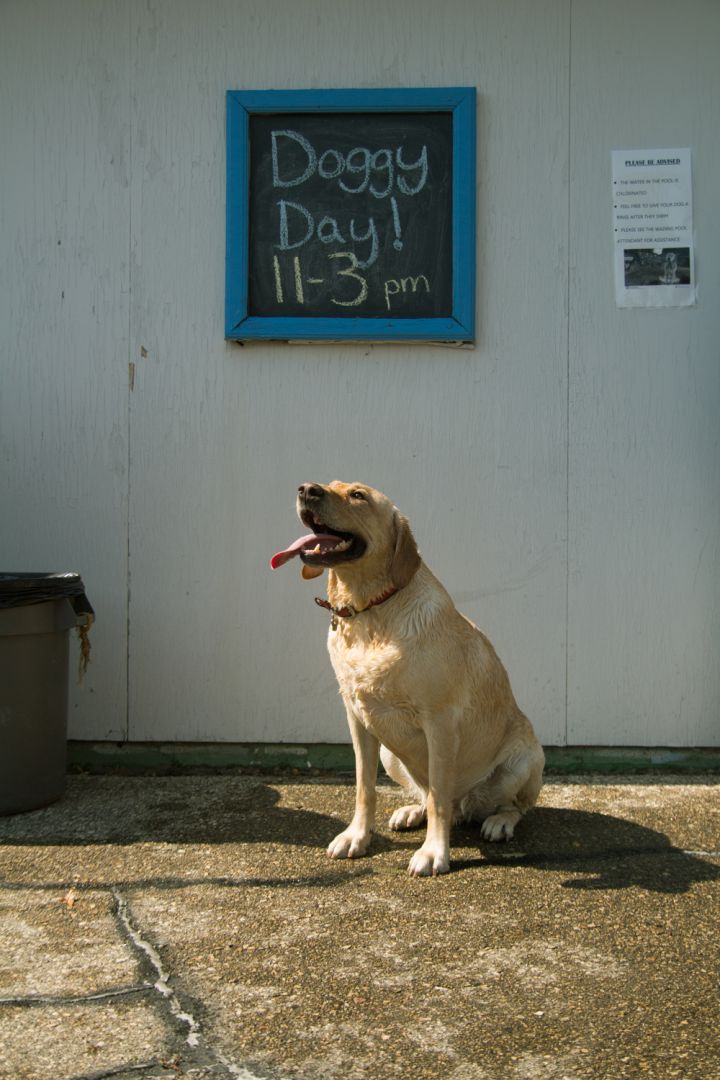 The special dogs-only day at Happyland park got its own sign.

A convergence of happy dogs, whether online or in real life, can be a source of joy for many. Even the concept of Doggo Days inspired excitement.

“When (the dogs) are advertised on social media, people really respond to that,” Garinger says.

On Sept. 2, as the Happyland pool was full of jumping, swimming, playing dogs, many of their accompanying humans shared in the glee, even as they got soaked by pupper splashes.

“I think that this is a really good event,” Alphonso says. “I think it would be really nice if somehow they could do this several weekends in the summer, just to give the dogs some time to relax, but I'm sure thats not sanitary, like (with) the people using the water and stuff.”

“I'd like to just commend the city for doing this, and I wish they could do it more often, but I appreciate them doing that,” Turner says, while his dog Wilson led a game of fetch (and also became the first large pooch to foul the pool).

Animal Services plans to assess how their first pool day went before committing to more events in the future.

“You see so much negativity going on at times in Winnipeg, so positive fun events like this, the dog pool event, hopefully will bring some positivity and joy to Winnipeggers.”

For more information about Animal Services, visit winnipeg.ca, look for their tables and adoptable dogs at community events (next up: ManyFest) and follow them on social media.
Updates about the Bonnycastle dog park can also be found at winnipeg.ca.
A list of pet-friendly housing options can be found at winnipeghumanesociety.ca/pet-owners/resources/pet-friendly-housing/.
Doggo Days are held the last Thursday of every month in the Bulman Centre MPR at the University of Winnipeg. See the events calendar at theuwsa.ca for more details.