Plays at Cinematheque until Oct. 27

Documentarian Errol Morris has made some of the medium’s most defining pictures. The Fog of War earned him an Oscar, and The Thin Blue Line wrote the book on true-crime docs while freeing an innocent man from death row.

His newest film, The B-Side: Elsa Dorfman’s Portrait Photography, focuses on less dire subject matter but is still steeped in Morris’s career-long obsession with the subjectivity of photography, memory and truth.

The film’s subject is Elsa Dorfman, who left behind a life rubbing elbows with luminaries of the Beat Generation in 1950s New York to become a photographer in suburban Massachusetts. Long rejected by the fine art establishment, Dorfman spent more than five decades working in commercial portraiture, carving out a reputation as one of the key photographers working with Polaroid cameras.

Elsa is an ideal subject for Morris. His films often focus on eccentric characters, but his portrayals are always loving and never condescending. While the film is ostensibly about Dorfman’s art, it explores her work as an extension of her personality.

That personality is warm and hospitable, fierce and opinionated, sad and hopeful. Her affection for her subjects is deep and sincere, and her approach is entirely unpretentious.

If anything, both Dorfman and the film are more interested with the craft of photography than any sort of artistic affectation. The focus is largely on the photography formats she works with. When people hear the word “Polaroid,” many think of card-sized “instant” snapshots. But Dorfman works in large Polaroid formats, with subjects posing for 20x24” or 40x80” portraits, which are manually wheeled out of giant cameras and awaken to life before her subjects’ eyes.

The film doesn’t explore photography formats in an esoteric, “inside baseball” manner. It’s more interested in the intangible magic of photography, like how the subject’s relationship to a camera affects their behaviour in front of it, or the way a supposedly “documentary” or “objective” medium creates pictures full of editorial flourish.

While The B-Side is a thought-provoking and pleasant movie, it often feels like Errol Morris-lite. There is pleasure in watching a masterful artist create something off-handed and spontaneous, yet there is a nagging feeling that the film is slight in a way his other films aren’t.

It’s not necessarily a case of subject matter. Films like Gates of Heaven or Vernon, Florida are a far cry from the geopolitical nightmares of Standard Operating Procedure or The Unknown Known, but they manage to still feel less like a trifle than The B-Side.

The reason for that feeling is a puzzle. It doesn’t necessarily lack for dread (photography fans will know how Polaroid’s bankruptcy and subsequent mismanagement leaves a dark cloud over the whole picture).

But there is a sense that The B-Side leaves everything on the surface. It’s emotionally rich but thematically shallow. Morris’s best work raises questions about subjectivity that leave depths to be plumbed. The Thin Blue Line ends with a thousand threads a viewer can pull at. The B-Side asks the questions, answers them in plain terms and ties up those loose ends. 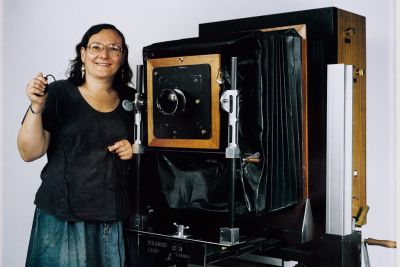