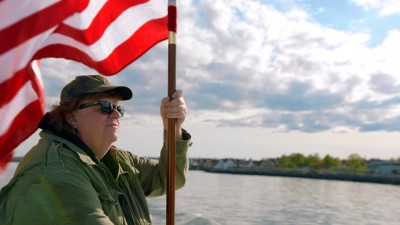 Chances are, if you’ve seen a Michael Moore film, you’ve already formed an opinion on him.

Most people who haven’t seen any of his movies have made up their mind about him. The point being, he’s nothing if not consistent. His movies are sort of like Ramones albums. Stylistically, they’re all basically the same, and they’re about the same things, but if you like one album, you’ll probably like the rest.

His latest film, Where to Invade Next, might not capture the cultural zeitgeist the way Bowling for Columbine did, nor does it contain the passionate urgency of Fahrenheit 9/11, but it’s still a fun and thought-provoking entry into today’s most vital social conversations.

The film’s premise is simple: Moore travels to countries around the world, looking for their best ideas, and “steals” them to bring back to America and implement.

The central joke that he’s “invading” these countries doesn’t really work or make sense, but whatever. His travels take him mostly to western European countries like Finland, Iceland and Portugal, but more far-flung locations like Slovenia and Tunisia are explored as well.

He looks at government policies and social programs, like Italy’s 35-day annual paid vacation, or Iceland’s legislation ensuring gender equality, and asks, “Why aren’t we doing this in America?”

Fortunately, Where to Invade Next avoids Moore’s go-to love of Canada, his favourite example of a country that does things better than America. It’s a smart move because virtually every idea he explores in the film is as absent from Canadian life as it is from America. Whether it’s Slovenia’s free college tuition, Finland’s revolutionary education system or Norway’s rehabilitation-based prison system, every example highlights a glaring omission in our society.

Certainly Moore isn’t presenting a nuanced picture. He’s upfront about this fact, saying he’s emphasizing the positive ideas of the countries he visits, not examining their social ills.

While detractors can certainly use this to quibble with his argument, it’s undeniable that most of what he presents are simple, easily-implemented solutions to massive problems. One of the film’s most revelatory moments is when Moore examines a French paycheck, which includes a line-by-line breakdown illustrating exactly what the employee’s tax dollars are being spent on. It might not seem like a big deal, but Canadians would likely be vocally outraged if, every two weeks, they could see that eight per cent of their federal taxes go towards defence spending, while a comparatively measly 12 per cent is split among Environment Canada, Parks Canada, Veterans Affairs, Health Canada, Transport Canada, the Canadian Food Inspection Agency, and “numerous (other) federal departments and agencies.”

A pitiful three per cent is split among dozens of crown corporations, including the CBC, Telefilm Canada, and the Canadian Race Relations Foundation.

Moore manages to keep the whole affair feeling funny and lighthearted, even when he’s provoking righteous anger or being genuinely moving. Again, Moore’s most provocative work is behind him, and Where to Invade Next won’t spark the 2016 equivalent of the gun control debate. But it’ll certainly make viewers laugh, and then make them angry.