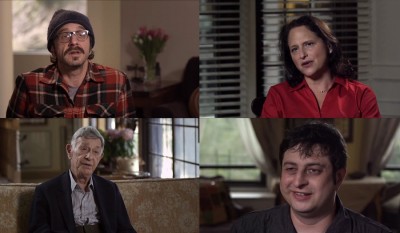 When Jews Were Funny
January 10-18 at Winnipeg Cinematheque

Director Alan Zweig (Vinyl) has made a career out of being eccentric and inserting himself in with his documentary subjects, so it’s curious that in his latest film, When Jews Were Funny, he chooses to stay planted behind the camera in this talking head interview feature, despite being part of the conversation. Though it is interesting to see his subjects listen curiously while Zweig attempts to define the thesis of his film (which isn’t made very clear) and can best be described as Zweig, being a 61-year-old Jewish man not knowing how to raise his 2-year-old daughter in a world in which his people may or may not be seen as the trailblazing comedians they once were. But it’s also about when comedy changed. And delivery. And Jewish mothers.

Throughout the film’s 88 minutes, Zweig talks to legends (Shecky Greene), has beens (Gilbert Gottfried), oddities (Rob “Super Dave” Einstein) and current favourites Marc Maron and Eugene Mirman, asking them their favourite Jewish jokes (most of which you’ve heard variations on - though it is noted by the subjects that it’s all in the delivery) and trying to find out if and when comedy changed. Mark Breslin, the founder of Yuk Yuk’s Comedy Club in Toronto, states that “The history of 20th century humour is Jewish. Period.” and the film makes a decent case for it, but he does note that being Jewish in 2013 doesn’t mean what it did when comics were coming up in the 1950s and ‘60s, stating that oppression helps humour but assimilation kills it. Unfortunately, only two comediennes are featured (Judy Gold and Cory Kahaney) and they talk about - guess what - JEWISH MOTHERS! It’s alarming that out of the, oh, I don’t know, literally hundreds of funny ladies currently alive that are Jewish, only two were interviewed to go up alongside the 30 men? Oy.

The interview clips, which are jarringly trimmed and feature no b-roll, are nicely shot, though the focus occasionally goes fuzzy when the subjects shift in their seats (get a camera assistant, Alan). The only b-roll that does pop up are old clips of Rodney Dangerfield and other late comedians on old variety shows - while not cutting away keeps the focus on the stories, it would have been nice to have something to flesh out the examples and stories given. That, and 88 minutes of talking heads that don’t really get funny/interesting until the 26-minute mark is difficult to swallow.

Zweig’s film is entertaining, interesting and thought provoking, but it’s mostly masturbatory. Despite all its flaws, it won the Best Canadian Feature at last year’s Toronto International Film Festival and does feature a great number of interesting stories that haven’t been told. If nothing else, it will put the spotlight on a few comics you might not know or have long forgotten about. Elon Gold is due for a comeback, right?