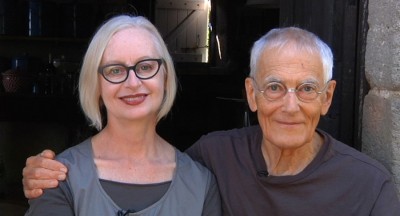 Love stories will always be popular. Everyone can relate to the desire for love, and some of the most beloved movies ever are about courtship and romance. But how many movies actually have something to say about love itself? It’s rare that a film offers true insight into love and relationships, the way love grows and changes over the years, and the ways it stays the same. Spring & Arnaud is a movie that, among its many accomplishments, understands love. It knows that sometimes the best way to explore love is to simply show it.

The documentary follows Spring Hurlbut and Arnaud Maggs, two Canadian visual artists who were a romantic couple for over 25 years. The picture explores their respective works and histories, but their romance is at the heart of this portrait. Directors Marcia Connolly and Katherine Knight (both of whom worked on the Wanda Koop doc, Koop) capture a profound love between two beautiful people in all its tender complexities, and the result is a sweet movie that digs a whole lot deeper than you might be ready for.

The couple themselves make the picture work. Spring and Arnaud are fun, eliciting smiles every moment they are onscreen. They explain the differences between their bodies of work, seemingly oblivious to how much they have in common. The film gives their work its due, and there’s plenty here for art nerds to chew on.

That’s not to suggest that the whole film is sunshine and rainbows. The spectre of mortality is all over it. Spring is an artist whose work revolves around death, and she’s keenly aware that Arnaud is approaching the end of his life. The darkness adds to the textured layers of the film’s core themes and shows how love approaches and surpasses death. Many more ambitious films attempt this. In its modesty, Spring and Arnaud succeeds brilliantly.