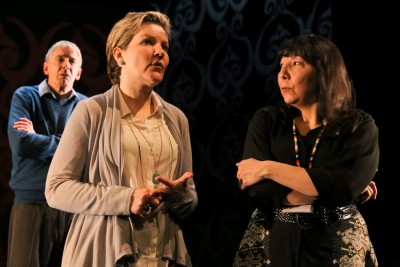 Plays at The Rachel Browne Theatre until March 20

Indigenous-settler relations is the focal point of Reservations, the latest production by Theatre Projects Manitoba. It’s also probably the most vital social conversation happening in our city, if not the entire country.

Issues that some may argue trump it, like income inequality or environmental disasters, are inextricably tied to it. No piece of art tackling such a vast spectrum of conversation can ever feel comprehensive or satisfying. Wisely, Reservations doesn’t try to. It’s content is a specific and nuanced voice in that conversation.

Reservations’ two acts are two seemingly disconnected stories, linked only by the broad topical umbrella they fall under. The first, Pete’s Reserve, is the story of a white Mennonite farmer determined to donate his land to the Siksika First Nation, against the wishes of his daughter and his Cree second wife. The second, Standing Reserve, shows a white couple battling with Alberta Child and Family Services over their indigenous foster children. Both acts share the same three actors, and little else.

Playwright and co-star Steven Ratzlaff makes different stylistic choices between these acts. While both are clearly political, Pete’s Reserve never feels overly pointed or didactic. We’re watching conversations between characters. They’re political conversations, but mostly because they’re coming from characters who happen to be passionate and opinionated. By contrast, Standing Reserve is much more overt in its didacticism. It’s not necessarily a bad thing, but after the relative realism of the first act, the stylization is much more pronounced. When things take a shift and a character gives a lecture at a university, Standing Reserve comes into its own. By owning that didacticism, rather than camouflaging it in dialogue, it becomes the play’s most effective moment.

All three performers hold their own, but it’s Tracey Nepinak’s turn as the lecturer in the second act that will stick with audiences. There’s an essential truth revealed by having a character we’ve already met present words they themselves have written. We’re offered a look into her inner life and philosophy, assumptions or prejudices by the audience are called into question, and we see how the character sees herself. Nepinak handles this shift without overstating anything. Her lecture is delivered as straightforward and academic, which makes it all the more truthful.

The play makes great use of lighting and projection design by Hugh Conacher. The projections comment on the setting rather than become part of it. When the donated farmland is being discussed, images of wheat blowing in the wind fill the stage. Music and sound design by Andrew Balfour is used similarly, but to lesser effect. His ambient soundscapes cut into the production at unexpected and seemingly random times.

They’re poignant reminders of the ghosts these lands are built upon which permeate each scene. But this type of ambient music doesn’t leave much room for nuance and humour, which Ratzlaff’s script has plenty of.

But it’s those elements that ultimately make Reservations a success. It’s modest, unpretentious and respects the issues it addresses. It understands our national conversation and its place in it.