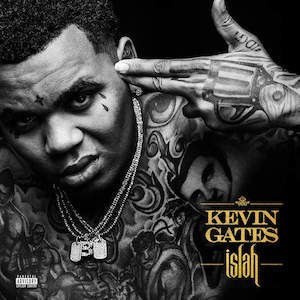 Baton Rouge rapper Kevin Gates is as well known for his antics as he is for his music. Never one to keep his thoughts to himself, Gates receives a mixed reception due to his at least strange and at best questionable – but always entertaining – Instagram videos, and is therefore one of those rappers that many people know about without having ever listened to.

Most recently, Gates made negative headlines after a video surfaced of him kicking a female concert attendee in the chest after she tried to grab his crotch during a performance. In an age where non-music headlines can maintain a career that does not have much musical substance, Gates is the exception rather than the rule. His studio debut, Islah, named after his daughter, is an incredibly well rounded album showcasing both his singing and rapping abilities, that is full of introspective, emotional tracks, as well as songs that have the potential to be giant crossover hits.

“You will never love me like my daughter love me” Gates sings at the end of the first verse on “Not The Only One” a song about the complications that come along with love. Love is a common theme on the album, with first single “Kno One”, a love song about being ‘a dog’—and it’s chorus of “she say I’m a dog but it takes one to know one” having the kind of infectious sing-a-long quality to it that could cause listeners to overlook, or not even notice, the actual content of the song – much like Fetty Wap’s breakout hit, “Trap Queen”.

This same infectiousness is found on “Two Phones,” a song about all of the different reasons – the plug, the load, women, money – Gates has multiple phones. One of the album’s most introspective and honestly emotional tracks is “The Truth,” a song where Gates addresses the aforementioned controversy that came about during one of his concerts.

The album’s seventeen tracks contain only three features, and all are on the same track, but listening to Gates does not grow tiresome. He has enough styles, switching – sometimes within the same track – between feverish, technical rapping to melodic crooning, keeping the album engaging the whole time. All in all, Islah is the kind of debut album that every artist aims to create – engrossing, entertaining, and sonically diverse, while never spiraling out of control.