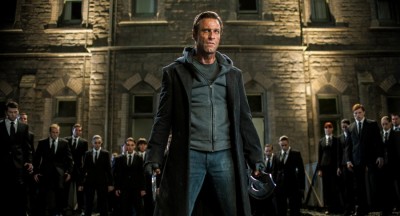 People like to throw the word “ridiculous” around pretty casually. I’m guilty of this myself. Quite frequently, I find myself using the word “ridiculous” without really thinking about what it means. I, Frankenstein, on the other hand, is ridiculous in the truest sense of the word: this is a movie so bad that the only appropriate response is to hold it up for ridicule.

I, Frankenstein is the latest in a string of big-budget CGI-heavy movies based on public domain properties, following such pictures as Jack the Giant Slayer and Hansel and Gretel: Witch Hunters. It stars Aaron Eckhart, Bill Nighy, Miranda Otto, and plenty of other actors who should’ve known better. The incoherent plot concerns Frankenstein’s monster and his modern-day role in an ancient war between gargoyles and demons. If that doesn’t sound juvenile enough for you, don’t worry: the movie has the creativity and emotional depth of a Nintendo 64 game. Every line of dialogue serves as exposition. Even when Eckhart is delivering the protagonist’s inner monologue in growling voiceover, there’s no character development. If a character opens their mouth, it’s to explain exactly what’s happening onscreen. It wouldn’t surprise me to learn that the credited screenwriters (Stuart Beattie and Kevin Grevioux, based on his graphic novel) have never read Mary Shelley’s Frankenstein, or even seen the James Whale adaptation.

Not only does I, Frankenstein operate on a ridiculous premise, but it delivers it without an ounce of fun or adventure. From moment one, the movie is completely miserable. The grey colour pallet never wavers, underlining the fact that this supposed fantasy movie couldn’t be less fantastic. The stakes are low as can be: the movie takes place in a modern city, but the streets are always deserted. If a car shows up, it’ll be smashed within seconds. The world is as dead and empty as the movie itself.