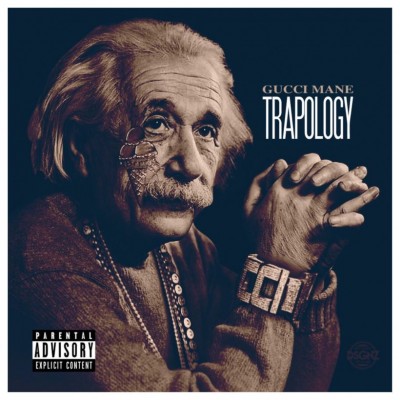 Gucci Mane was charged for possession of a firearm in the Spring of 2014, and isn’t getting released until early 2017. Since this most recent incarceration, he has released 9 mixtapes, and is slotted to drop full length albums produced by two of the biggest names in the known universe (Mike WiLL and Diplo) as well as another mixtape in collaboration with Chief Keef (entitled Big Gucci Sosa 2).

The internet will tell you that whenever Guwop is free to go about as he pleases in his hometown of Atlanta Georgia, his producers/managers/’squad’ attempt to keep him on a very tight leash, spending hours in the studio recording as many verses as possible before he inevitably returns to prison. There have got to be thousands of recorded Gucci raps, because he continues to release music every couple months.

If that isn’t a weird enough way to carry out a music career, take into account that Big Gucci is a pretty terrible rapper. Just abysmal and uninteresting. Every song on Trapology has at least one featured artist (including Riff Raff, Snoop Dogg, Fetty Wap, Lil B and Father) that out-perform Gucci almost 100% of the time. His lyrical content in a nutshell is essentially ‘Hey it’s me Gucci, I am great, and rich, and very cold.’

Despite all of this, Trapology is worth listening to on repeat until the next mixtape drops. Sure, Gucci Mane is undeniably an awful human being and terrible musician, but there is something about Gucci’s work that is so far above all other popular rap music. There are no claims of real artistry; it’s hard to say if he even listens to music, or knows what it is.

Listen to ‘Born With It’ featuring Soulja Boy and attempt to draw substance out of the lyrics. You can’t. Musicians historically need to evolve to stay popular and relevant, yet 35 year old Radric Davis will continue to halfheartedly make the same ignorant rap song over and over again. You may feel your brain cells deteriorating while listening to Trapology. But it’s great.