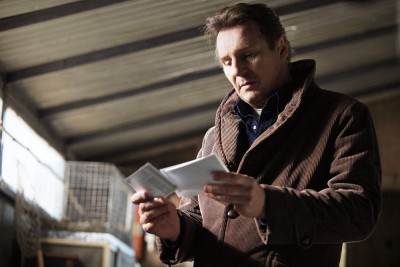 A Walk Among the Tombstones is the new film from writer-director Scott Frank. Despite a 25-year career as a screenwriter for such blockbusters as Get Shorty and Minority Report, he only has one previous directing credit, the excellent 2007 crime thriller The Lookout (lensed in Winnipeg). Tombstones isn’t quite the mini-masterpiece that the Joseph Gordon-Levitt-starring Lookout was, but it’s still an engaging detective thriller, the likes of which Hollywood doesn’t produce often enough.

Tombstones, adapted from Lawrence Block’s novel of the same name, stars Liam Neeson as Matthew Scudder, an unlicensed private investigator and recovering alcoholic. He’s hired by drug trafficker Kenny Kristo (Dan Stevens) to track down the men who kidnapped and murdered his wife. Kristo can’t go to the police, since his line of work isn’t exactly legal. What he wants to do with the killers isn’t exactly legal, either.

What unfolds is a dark and entertaining, if not groundbreaking, serial-killer detective story. As the picture progresses, it starts to feel like Silence of the Lambs-lite. I suppose that’s sort of inevitable when working in this genre, since the best possible version of this story has already been made in Lambs. But Tombstones is hard-boiled enough to differentiate itself from that film.

Until now, I’ve managed to abstain from Neeson’s recent turn as an action-thriller star, so there’s a bit of excitement here for me, whereas the novelty may have already worn off for others. I even chuckled at the obligatory scene in which Neeson makes badass threats over the telephone, despite having never seen Taken. But he makes Scudder a captivating movie P.I. without borrowing from clichés. Dan Stevens (star of The Guest) is good in a much smaller role here. Overall, Tombstones might be a textbook genre exercise, but it’s a well-executed exercise in a genre 21st-century Hollywood is sadly ignoring.