Where the magic happens

Musical tradition of craftsmanship continuing on in familiar locales

We know the musicians. They’re on stage, in our iPhone earbuds, on the YouTube screen. But what about the people who craft the gear? Two of the world’s finest independent instrument builders are right here in Winnipeg.

Al Beardsell and Florian Vorreiter (pictured below) are part of a growing number of luthiers who are making high-end, hand-crafted custom guitars for clients all over the world.

“It’s a bit of a solitary existence,” Beardsell says with a laugh.

While both men have a thriving reputation among clients outside of Winnipeg, a change in the location of each of their shops has helped make a difference with local clients.

Last March, Beardsell moved his workshop from his old garage in Wolseley into a space on St. Matthews previously occupied by the legendary Gar Gilles, founder of Garnet Amplifiers.

“Having this space has actually been really great to try and make some inroads locally,” Beardsell says. “I don’t have to explain where it is to too many people.”

Vorreiter also moved around a bit before finally finding space for his business in another significant locale: the old Sled Dog Music building on Westminster.

These two particular luthiers do exceptional work, something that’s obvious from the look, sound, and feel of their guitars, which can take anywhere from 150-300 hours to build. While Beardsell relies more on his extensive experience gained from making a living at his craft over the last 18 years, Vorreiter went down the path of a more formal education.

“ These two particular luthiers do exceptional work, something that’s obvious from the look, sound, and feel of their guitars…

Regardless of that difference, they’ve both invested a ton of time and energy into honing their craft, and along with that comes pressure to succeed professionally.

“When you study for six years and immediate success doesn’t kick in after one or two years, you get a little antsy,” Vorreiter admits. “Because you’re like ‘you know, I put in this much work so it better be worth it.’”

It’s evident that personality and experimentation go into the craftsmanship, as both Beardsell and Vorreiter have distinct qualities in the design of their instruments.

Beardsell has made several multi-scale guitars that have a unique ‘fan fret’ design, allowing for a more even tone and tension in all of the strings, leading to greater stability and consistency, even with the low string(s) tuned down. He also has unique shapes and placements for the sound holes on his instruments, often putting them on the side creating a different sound experience for the player.

Vorreiter meanwhile, has been invited to New York’s Center for Transformative Media to share his ideas stemming from projects such as his ‘Fusion Guitar’. “They invited me to speak about the future of the guitar, because I try to play with that to push the limits a bit,” he explains.

Some locals are taking the opportunity to learn from Vorreiter too, such that he has a waiting list of people wanting to enrol in his guitar building course. On top of building and repairing instruments, he somehow finds the time to teach his programs and also do research work on the side.

Despite their own accomplishments, they each point to world-renowned Winnipeg luthier, Daryl Perry, as the senior figure of hand-crafted instruments being made here.

“He’s really sort of the granddaddy of guitar-making in Winnipeg, Beardsell says. “He’s been at it for 25-30 years.” 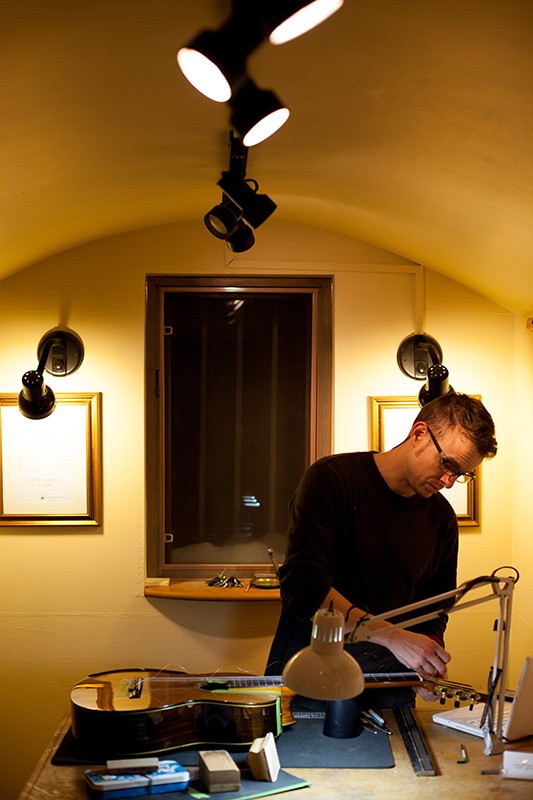