Where have all the benches gone?

An urban mystery leads to questions about social justice

With photos from Keeley Braustein-Black

Long-time visitors to Albert and Arthur Streets may have fond memories of hanging out, sipping coffee, and gazing at the historic buildings that give the area its distinct flavour.

Chances are, they were sitting on a bench – in front of Cinematheque, near Albert and Bannatyne, or further down Albert past McDermot.

In mid-2012, all of those benches disappeared.

Tim Brandt, a volunteer with Junto Local 114 which was part of the Old Market Autonomous Zone Co-op (A-Zone) at 91 Albert St., recalls hearing theories that local “authorities” may have disliked people hanging out and sleeping on the benches. The bench in front of Bodegoes was a place for rich social interaction between activists, passersby, and locals.

“Could they have been removed because they were too much a gathering place? That was very upsetting, to think about that.”

In October 2012, Brandt wrote city councillor Mike Pagtakhan requesting benches for Albert Street. He received no response. He phoned Pagtakhan’s office. He recalls someone saying that “they didn’t have it in their budget” to replace the benches. 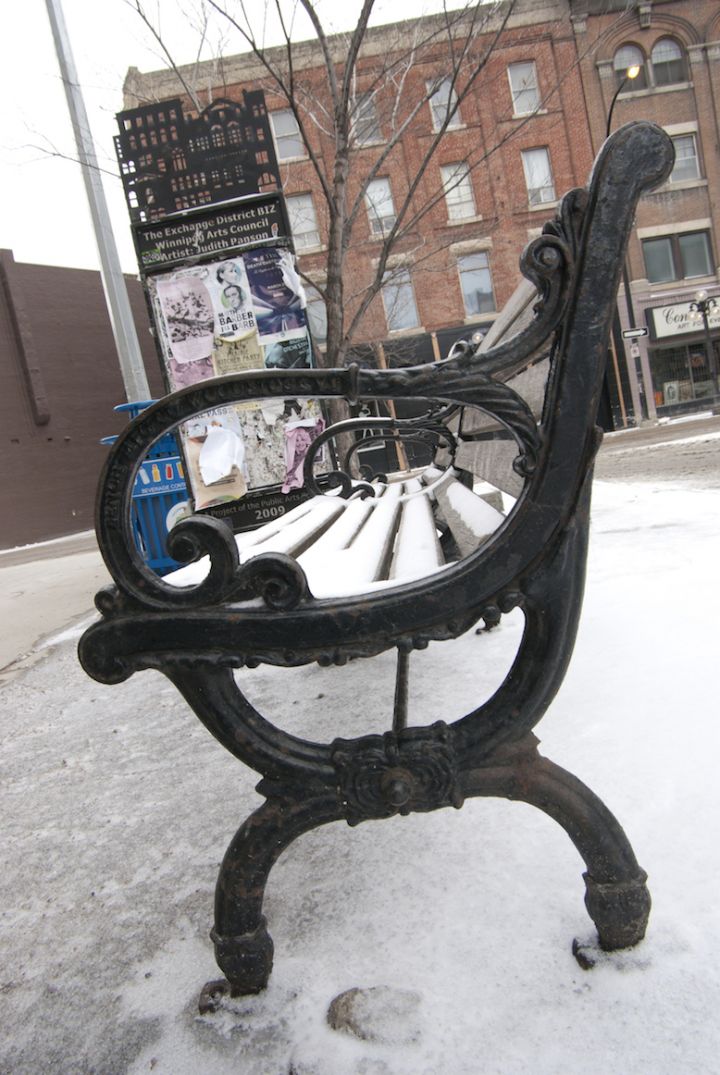 However, the benches were not removed for budgetary reasons.

According to Brian Timmerman, executive director of the Exchange District Business Improvement Zone, the benches were removed to end “nuisance behaviour” such as people openly drinking alcohol, mouthwash, and hairspray.

Most of the drinking was in the fenced area east of Cinematheque, an urban green space known as a pocket park. At the time, this park was nestled within bushes.

“What would happen was, people would go into the vendor, buy usually king cans or two litres, then they’d come onto Albert Street, crack ‘em open and drink,” Timmerman says, adding that the vendor was not encouraging the behaviour.

“Because that was their source of alcohol, they tended to be in that (pocket) park all day.”

“If (customers) see somebody drunk, in their minds all of a sudden they think, ‘This area is unsafe. It’s dangerous,’” Timmerman says, though he feels that this perception was false. “There wasn’t any threats or assaults or anything like that. It just made people feel uncomfortable.”

First the BIZ had the city remove the bushes to make it harder for people to hide the drinking, which stopped it for a while. Removing the benches was a “last-ditch effort,” Timmerman says.

The result: the drinking moved to the benches on Albert. Eventually, those were removed as well, in a piecemeal fashion, leaving the only one standing by Notre Dame.

“We were receiving complaints, concerns about behaviour, and we didn’t want to go, ‘Well, let’s clear out the whole street, to heck with that.’ We just took it one step at a time,” Timmerman says.

He stresses this was a response to specific behaviours, “not an attack on the homeless.”

Since then, the BIZ has received a few comments about the benches, but not a “hue and cry.”

“We’ve had a couple where people would get back to us and say, ‘Look, I was with my elderly parent, and it would have been nice to have a seat, you know, somewhere on the street,’” he says.

However, he wants the public to know that, should there be 20 to 40 requests, one new bench would likely be installed on a trial basis.

“More benches, more amenities for people, of course is a good thing. But sometimes you have to weigh that with the level of comfort that people have who are coming to visit,” he says.

This new bench would be segmented with a bar in the middle to stop people from lying down.

Dr. Jino Distasio, director of the Institute of Urban Studies, feels that removing the benches was a misuse of architecture.

“We’re punishing behaviours here that we think are not correct,” Distasio says.

“What we should be doing is looking for partnerships, working with various agencies to support individuals who are struggling.”

Distasio describes segmented benches as “hostile architecture” or “defensive architecture,” a controversial trend in urban design. Other examples are mini-spikes on ledges and sprinkler systems whose sole purpose is to ensure people are not “congregating.”

“These approaches, to me, are offensive. And they’re offensive to a lot of urban activists,” he says. “You don’t really design your cities to be so defensive where we’re cordoning off sections or imposing restrictions because we feel that somebody engaging in a different lifestyle may sit on that bench.”

He compares it to installing spikes along Broadway where people gather for lunch.

“So what if we did that? And said ‘Forget it, office workers, we don’t want you congregating, eating nasty hot dogs, and socializing,’” Distasio says.

Benches are a vital way for people to relax and connect to the urban world, especially in the Exchange District with its beautiful architecture.

“To immerse oneself in the urban landscape, you need places to sit and absorb. You don’t always need a street cafe where you’ve got to buy a coffee. You need a spot to sit down,” Distasio says.

“Maybe we need a little bit of a plan, beyond just the BIZ, to say, ‘How do we create spaces for people to sit and gaze and engage in the landscape?’ We have art plans and projects and lighting plans. I don’t think anyone’s ever really come up with, you know, a ‘seating plan.’”

Over the years, the A-Zone has improvised solutions. In 2012, DIY Festival participants made a planter with seats built into its sides. In 2013, Brandt and his wife Diane built a little bench from an old bookshelf.

“It was well-built, with solid wood and screws and glue and stuff, but within a few days of it being outside, it had been broken,” Brandt recounts sadly.

Want to see seating on Albert Street? Let the Exchange District BIZ know at 204-942-6716 or info@exchangedistrict.org. 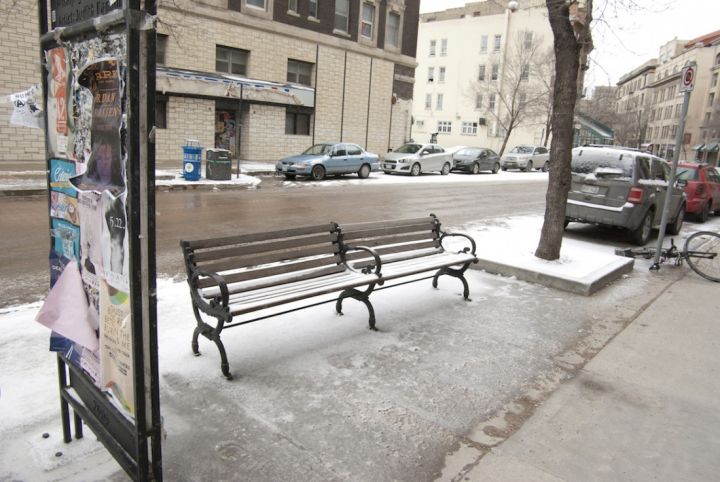 The last remaining bench in the Exchange District.