Shining a light on everyday spaces

For those stepping onto campus for the first time, taking in the finer points of this space could likely be less of a priority than finding the best way from class to class and figuring out where everything actually is. And for those who’ve built a familiarity with the campus over past years, maneuvering through crowds can easily pull focus from an appreciation of the physical surroundings.

It’s easy to fall into a habit of navigating space - whether it’s new or familiar - from a purely functional perspective. But these buildings where thousands of people live, work and study carry their own stories. Whispers of history live in corners, in hallways, through doorways that are off the usual path but yield surprising views. 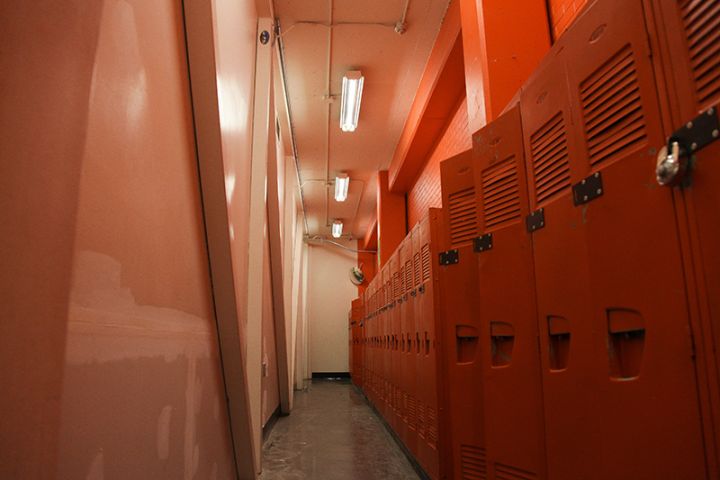 One set of many brightly coloured lockers in Centennial Hall

The University of Winnipeg (U of W) campus is home to many underappreciated micro-vistas - spaces that eyes are prone to skip over, or design elements that fell out of favour for a few decades.

With the start of the new year, why not take a moment to walk through this space with a new way of seeing?

Many of the elements highlighted in this photo essay can be found in Centennial Hall, a building central to the U of W that is a relatively newer addition to the array of of built spaces. Centennial was built in 1972 and was designed to fill in the central space between other buildings of the campus that had been slowly growing since 1871. 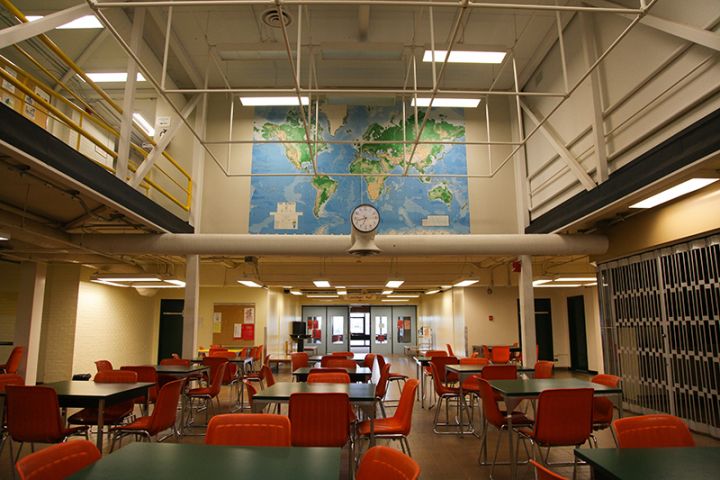 The open space of the fourth-floor buffeteria is one part of Centennial Hall's original concept, and wandering eyes might appreciate the map of the world, the oddly perfect clock placement and the appropriately coloured (for the '70s) bright orange chairs.

Nearly a half-century ago, the Late- Modernist Centennial Hall was lauded as an architectural success on the international stage.

An image of the new hall, brightly lit from the interior against a dusky sky, graced the cover of Progressive Architecture magazine in 1973. A larger-than-life version of this cover is printed onto the wall next to 3C16 - on the third floor, just off to the side of the Centennial escalators - to remind campus passersby that this space they’re rushing through was once a big deal.

Behind those escalators on the third floor, a mural series of historical facts and images prepared by Serena Keshavjee (associate professor in History of Art) chronicles the celebration, decline and renewed interest in Centennial Hall.

“Centennial Hall was built on the radical architectural and engineering principles that (Lewis) Morse had acquired in 1968 while in London, England,” Keshavjee writes. “Centennial Hall was designed to make the university environment accessible and inviting.”

Original design elements - such as the furniture - were damaged and not replaced, the addition of Eckhardt-Grammatté Hall closed off the originally open South entrance, and more generally, as the building was used, its architectural value was obscured by the vagaries of everyday campus life.

“Although it began as an exciting icon of cultural liberation, slowly, as the building was modified by practical needs, it became devalued in the eyes of faculty, staff, and students,” Keshavjee writes.

Yet, next to this mural-essay, the hallway linking Centennial to Duckworth Centre has been home to Rodney LaTourelle’s Chronochroma 6 since 2010, a site-specific installation that emphasizes structural elements of the hallway that once acted as its unique calling card. 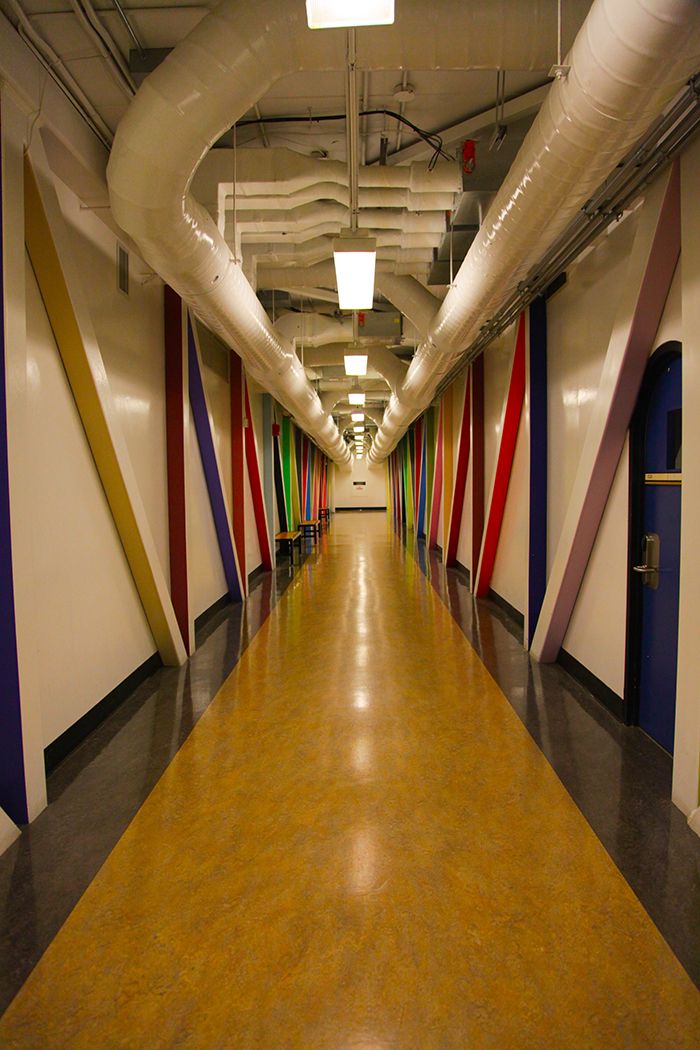 The pops of colour in this hallway are part of Chronochroma 6.

The staircases that connect the Centennial Hall floors remain pockets of vibrant yellow - little sunny spirals that keep the ’70s alive today, even if just for a few storeys. And the miniature hallways filled with lockers on the main floor are washed in orange, echoing the bright palette of the original design.

What was innovative in the early ’70s may seem obvious and old from a 2018 vantage point, given that exposed ductwork and steel beams went from notable to commonplace, but these often-overlooked aspects of Centennial Hall aren’t just special because they’re old. 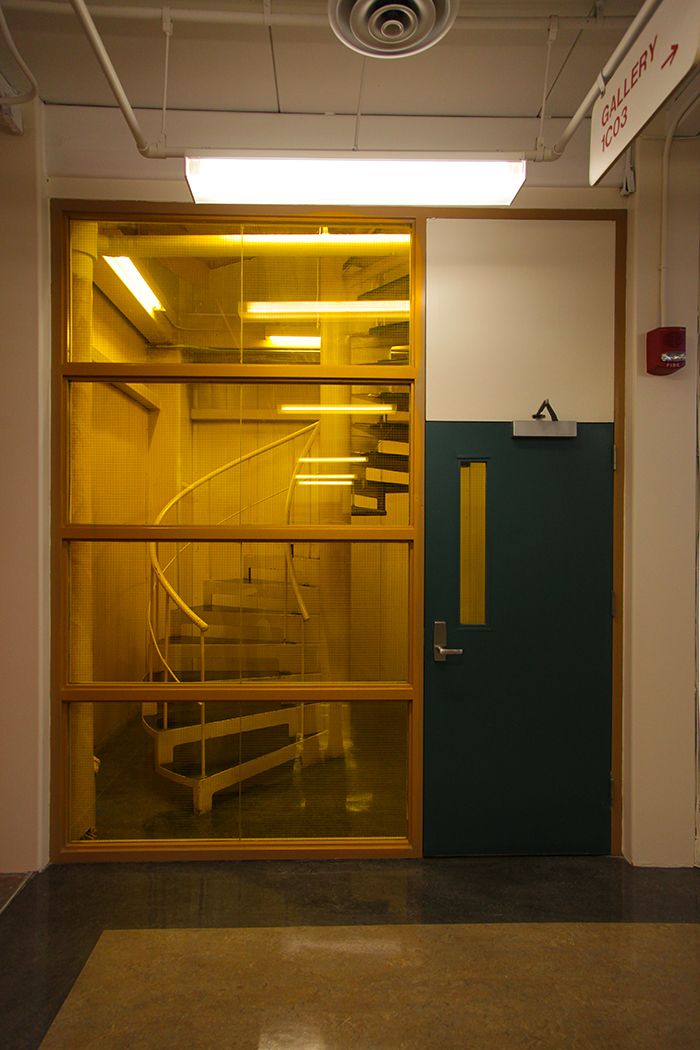 Entering the yellow spiral staircases in Centennial Hall can be a surreal experience.

“Centennial Hall is nationally recognised as a building of great architectural importance but little recognition has been given to it locally,” the Winnipeg Architecture Foundation writes in their overview of the building.

Perhaps local recognition can begin on a smaller scale - from those who inhabit this space on a daily (or semi-regular) basis. Given that thousands of people will spend hours and hours of their lives here, maybe there’s room in there to carve out a little window to pause and consider this space, how it came to be, and everything it could be.