Role of the police in Winnipeg

Winnipeg has a long and complex history with policing. Many inner-city neighbourhoods and marginalized groups experience issues with safety but have had, at times, a strained relationship with the Winnipeg Police Service (WPS).

Community activists, such as Leslie Spillet, propose community policing and civilian oversight as ways to mend strained relationships. Experts and stakeholders have varying opinions on the effects of these measures, however.

Community-police tensions lead to board 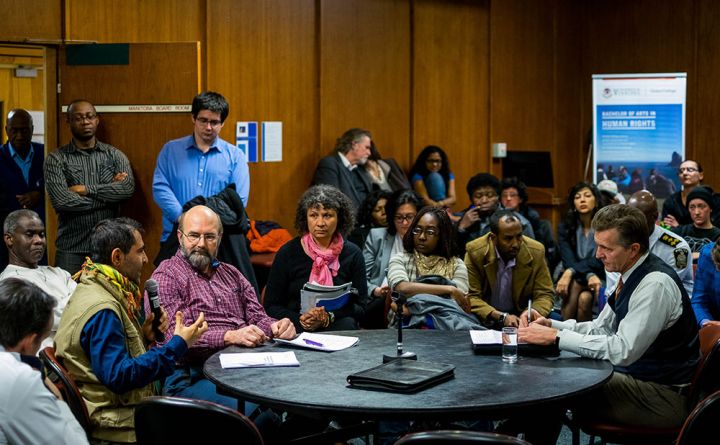 Members of various Winnipeg communities, RCMP and the Winnipeg Police Service came together in a public forum to discuss policing in multicultural communities on March 10, 2016.

Leslie Spillet was a member of the Winnipeg Police Board from its inception in 2012, serving until July 2016. Spillet, who is Indigenous, currently serves as executive director of the non-profit Ka Ni Kanichihk.

“I think Indigenous people felt that they were being over-policed and yet underserved by the police,” Spillet says. Some concerns she names include the potential of racial profiling, a lack of input into how policing was done and a mistrust of the WPS to investigate itself.

“There’s good reason for people in the North End to be afraid of police – Indigenous persons specifically,” Dr. Kevin Walby, an associate professor in criminal justice at the University of Winnipeg (U of W), says. Some reasons for mistrust of the Winnipeg police, he argues, include the shooting of Indigenous man John Joseph Harper in 1988.

“We thought that community policing was the way to go,” Spillet says of her time on the Police Board. Part of this, she elaborates, would be stronger relationships between police officers and members of the communities they police, including input into police priorities. She believes community policing would facilitate these stronger relationships.

Spillet says community policing would include deploying officers in neighbourhoods, not just in response to reported crimes. Officers in communities can get to know individuals on a friendly basis and contribute to community development, she says. 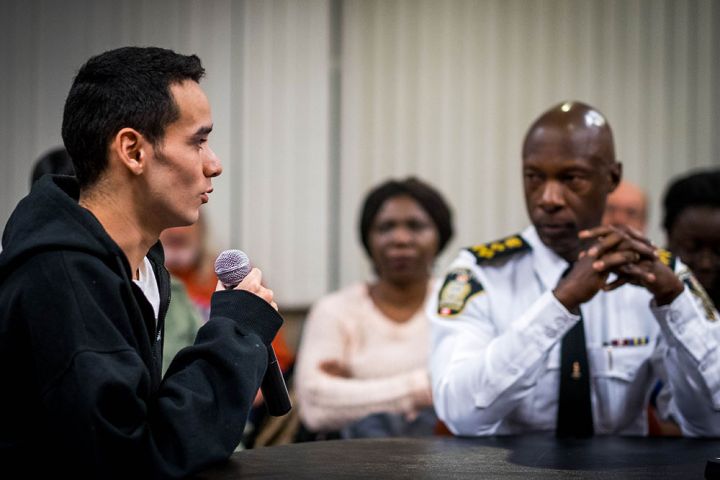 The ideal of community policing

Dr. Steven Kohm, chair of the Criminal Justice department at the U of W notes that the ideal of police being a part of the community goes back to the start of professional police forces.

He notes that professional police forces developed in England in the 19th century during a time of industrialization.

“Professional policing is actually a new invention,” Kohm says. Before that, safety was handled by ordinary citizens watching out for one another. Informal patrols become less effective as a way of providing safety to larger and more complex industrial cities, Kohm says.

A key figure in developing a framework and vision for how this new institution would operate was Sir Robert Peel, Kohm says.

“Every police force across North America, and across the world, even, like to talk about Peel’s Principles,” Kohm says.

Peel’s Principles refer to nine guidelines, initially written down in 1829 in England for London’s Metropolitan Police. The seventh principle stresses the need to maintain relationships with the public to ensure that “the police are the public, and that the public are the police.”

This principle describes the unique aspect about professional police as being that they are the “only members of the public who are paid to give full-time attention to duties” that every citizen should perform to ensure community safety.

Policing became reactive in the 20th century, with a focus on response time to crimes, Kohm says, and this led to feelings of disconnect between police and the communities served. In response, Kohm says, the notion of more community-oriented policing returned as an ideal in the 1970s. 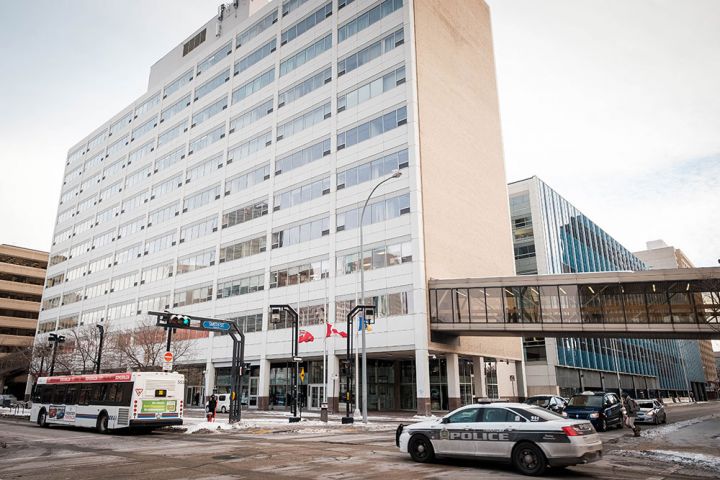 Community policing, particularly the aspect of having many officers patrolling neighbourhoods, is not without its criticisms.

“In some of the studies, they find that having police available just increases the crime rate. So a lot of minor crimes end up being reported,” Dr. Michael Weinrath, a professor of criminal justice at the U of W, says. He notes it is not clear that reporting more minor crimes actually reduces crime.

Mitchell van Ineveld, a U of W student, says that in their experience, WPS activity is not always for the best.

“Their slogan is something to do with building communities or community policing, but their approach seems to be pretty harsh on the most vulnerable members of the community,” they say.

Ineveld says they have noticed particularly harsh policing of homeless individuals. They say any time they see police officers downtown, they do not feel safe but feel concerned for others who may be negatively affected by the police.

However, Kohm argues that cracking down on minor crimes and nuisances is part of the legacy of community-driven policing.

Broken windows is a criminology theory introduced by American academics James Wilson and George Kelling in 1982 in the Atlantic Monthly. It asserts that minor infractions, such as breaking windows, signals neighbourhood disorder. This, the theory claims, leads to greater crime. The theory serves as a rationale for harsh enforcement of minor crimes.

Kohm notes the movement for community policing occurred while the fear of crime, as opposed to crime itself, became a major public policy concern. Communities can be filled with people fearful of activities like panhandling, he suggests. This can drive measures like cracking down on panhandling, which can be a community-driven policing priority but not necessarily for the best, Kohm says.

“Public police have special powers in society to use force like nobody else can. They are becoming more militarized in some ways,” Walby says.

He notes that there has been research coming out of the United States indicating there is more  militarized policing, and it may hinder safety. Walby says that along with an honours student, Brendan Rossier, he’s done research showing a similar increase in Canada.

Walby notes the stated use of SWAT teams is for the most extreme cases of public endangerment, but in practice they are being used for matters including traffic duty, patrols and mental health calls.

American studies show using more militarized techniques and technologies by police increase the risk of violence, even when other factors are accounted for, Walby says.

Spillett says that when she was on the Police Board, it was the Board’s intent to look at policies that had the greatest impact on communities, and a major one was the use of force policy.

“Police will tell you that they have very strict guidelines on use of force, and that, through proper training, you don’t go straight to using a firearm. There’s a hierarchy of different kinds of force that can be applied in a situation,” Kohm says.

He believes that civilian oversight and investigation can result in better handling of police misconduct, including excessive force. He reasons that it is natural for people to be biased in favour of their work colleagues, so police self-investigation will not work that well.

Kohm sees some promise in the Independent Investigations Unit (IIU) of Manitoba, launched in 2015 to investigate issues with the WPS and other police forces operating in Manitoba.

While there may be protocols for dealing with individual cases of excessive force, Walby is doubtful that police governance entities in Winnipeg can deal with systemic trends.

He is particularly skeptical of the Winnipeg Police Board, believing it does not have close control over the police budget and hence operations. Walby believes they often serve as a rubber stamp for the WPS’s own priorities. 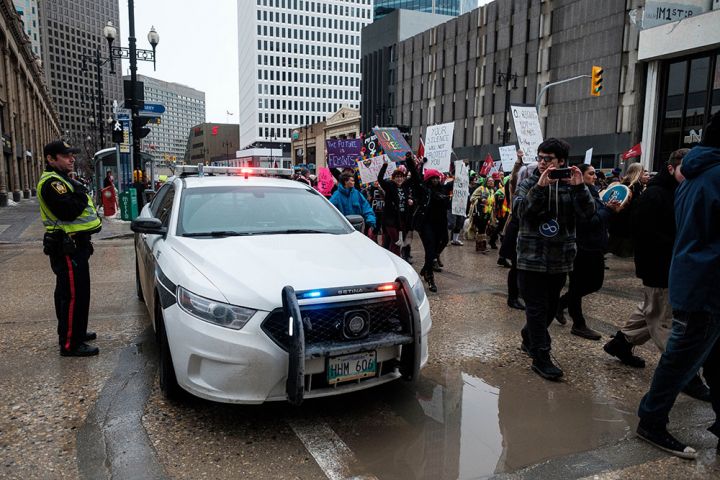 Winnipeg Police block traffic and keep an eye on marchers as they make their way down Portage Avenue during the Women's March, January 21, 2017.

Data and the limits of policing

“What most studies of community policing find is that it makes people feel better,” Kohm notes. When one observes crime rates, however, he says that there is little unambiguous evidence that it reduces crime.

Weinrath notes that if police are patrolling a corner, people who intend to commit a crime will just wait until the officer is gone on to another area to commit the crime. To actually have patrols work at deterring crime would require an unfeasibly large number of patrols, Weinrath says.

He says that police have had more success with an intelligence-led type of policing that employs data analysts and heavy use of informants. This is a more targeted approach than general patrols.

Kohn agrees that this type of approach is better at reducing crime but notes that it doesn’t make the public feel as good.

There may be limits to what policing can do, however.

Jessie Leigh was the community development co-ordinator for the Dufferin Residents Association until April this year, when budget cuts affected her position.

She notes that work by U of W professor Jim Silver shows that spatially concentrated, racialized poverty is a unique feature of many North End neighbourhoods, including the Dufferin neighbourhood. Deprived access to resources, Leigh notes, can broaden what safety means.

“Recreation is a form of safety. Community gardening initiatives, beautification relate back to safety,” she says.

“It’s hard for the police to have a big impact on crime in a city. Crime originates from a number of different social issues,” Weinrath says.