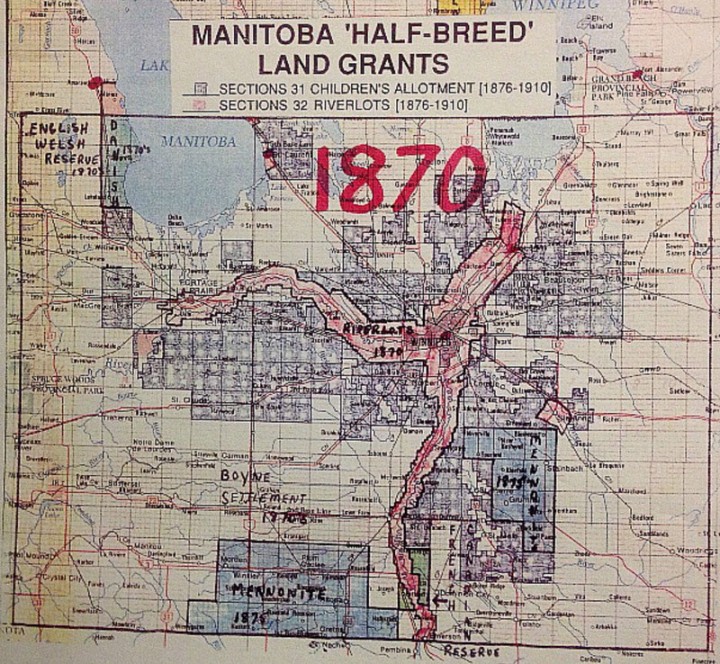 A map depicting the acres of land involved in the grant resulting from the Manitoba Act. The Supreme Court of Canada ruled that the land grant was never fully or properly implemented.

It’s interesting that Manitoba celebrates the February long weekend as Louis Riel Day, rather than Family Day like other provinces across Canada. After all, the historical grievance that exists here has been affecting local families since it was set in motion in 1870 with the signing of our founding document, the Manitoba Act.

Manitoba Metis Federation President David Chartrand encourages everybody to focus on all of the above.

“It’s a time for family, it’s a time to celebrate Manitoba… and at the same time give some credence and kudos to [Riel] as the first Premier of our province,” he says, indicating that Riel now has his rightful title restored in the Manitoba Legislature.

It would be understandable for Chartrand and the Metis people to be in no mood to celebrate.

In March of 2013, following 32 years of lengthy court deliberations, the Supreme Court found that Section 31 of the Manitoba Act was never properly implemented. The provision of a land grant of 1.4 million acres, inside of which the entire city of Winnipeg sits, was to be set aside for the children of the Metis (in other words, for Metis families).

It has now been almost a year since the Supreme Court of Canada ruled in their favour, yet no government action has taken place with respect to the court decision.

“It was the Conservative government that negotiated this and didn’t fulfill it,” Chartrand says of the contract between Canada’s first Prime Minister, John A. Macdonald, and Riel’s provisional government that brought Manitoba into confederation.

“Now we have a Conservative government in place that could actually fulfill it and put it full-circle.”

Bernard Valcourt, Minister of Aboriginal Affairs and Northern Development Canada, has demonstrated that little, if any, action is being taken by the federal government so far.

“Clearly it’s not a priority for Minister Valcourt,” Chartrand says. “I’m just hoping that it’s not the same position by the Prime Minister of Canada, because if it is then clearly the Metis will have to sit and wait.”

Waiting is something the Metis have been forced to do for 143 years and counting, but Chartrand claims they’ll never give up the fight. “There’s not a doubt in my mind, there will be a government that’ll come along and settle this issue.”

A settlement process will be set in motion, the only question is a matter of when. Both the leaders of the federal NDP and Liberal parties have already committed to Chartrand and the MMF that they will initiate negotiations should they get elected into power.

Liberal Party leader Justin Trudeau did so last September in his message to the MMF Annual General Meeting. “The courts have provided much needed clarity around your longstanding land claim, and now the federal government must sit down and – nation to nation – negotiate in good faith to reach a fair and equitable resolution to this historic injustice.

“And I commit to you,” Trudeau promised, “if this [Conservative] government does not, my government will.”

Chartrand’s biggest concern is that the negotiation process establishes an appropriate ‘terms of reference’, and that the right collection of people are at the table to make sure all the impacts are considered by whatever form the settlement takes.

“It’s going to take experts to resolve this, and top-notch lawyers and consultants,” Chartrand explains. “This is nothing small.”

As he describes the words of the crown lawyer representing Canada in the Supreme Court case: “this is going to affect every Canadian and it’s worth billions of dollars.”

For more info about the Manitoba Metis Federation and its land claim case, go to mmf.mb.ca.