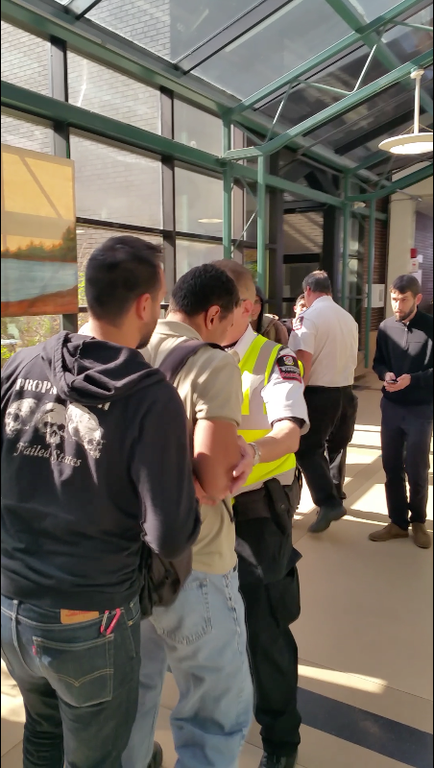 On Oct. 6, a peaceful protest in Riddell Hall at the University of Winnipeg (U of W) didn’t stay serene for long.

A group of students organized a peaceful demonstration beside a table set up for military recruiters, Peyton Veitch, the University of Winnipeg Students’ Association (UWSA) president, says.

“Myself and other members of the (UWSA) executive attended that protest in solidarity and to express our concerns with the militarization of our campus space,” Veitch says. “It was a very respectful display.”

As the protesters were getting ready to disperse, a group of U of W security officers came up to them to ask for their IDs.

“Students started asking some questions and raising some objections,” Andrew Vineberg, one of the protesters, says. “The guards acted in an extremely aggressive and escalating manner and they were the ones who were initially aggressive and violent.”

“There was a fairly heated exchange between one of the security guards and one of the students, which then resulted in a bit of pushing and shoving,” Veitch says. “But luckily the situation was deescalated and cooled down and everyone went their separate ways.”

The security situation raised some concerns among the students.

“Universities are the places where peaceful protest should be celebrated and I think that the response of the security service was disproportionate and heavy-handed in responding to a situation that was not out of hand and (where) no one’s safety was at risk,” Veitch says. “This demonstration absolutely did not violate the Respectful Working and Learning Environment Policy.”

Chris Minaker, a senior executive officer and advisor to the president of the U of W, says the school supports the students’ rights to demonstrate peacefully.

“Security heard that there was a protest and that there were students who had encircled the Canadian Forces table and were chanting in raised voices,” Minaker says.

“There is a policy that allows security to ask for IDs. The policy only comes into play when the security, through their standard operating procedures, perceive that there is a need for them to ask for an identification. Typically, if there is someone who is creating a disturbance on campus,” he says.

The university is planning to work together with the UWSA to figure out what happened.

“We take very seriously this incident and we're conducting a full review,” Minaker says. “Our goal is to get a handle on what exactly happened, but we are really concerned about how we can in the future provide a safe environment.”

“The security tape is not that good. It doesn't really show all angles of the incident,” Minaker says. “If students want to come forward and let us know what happened from their perspective and also if anyone has a video that can help us to understand what happened, then that would be helpful.”

Minaker stated that anyone with video footage or more information should contact the UWSA.