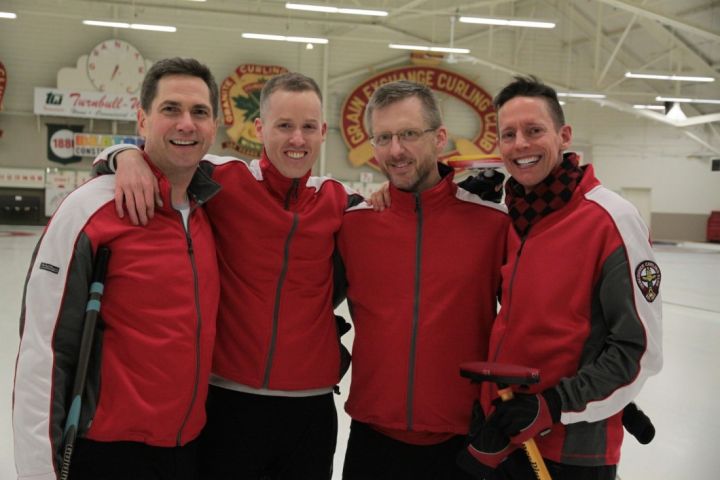 The KCRL is one of nine LGBT (lesbian, gay, bisexual, transgender) curling leagues from Vancouver, Calgary, Edmonton, Saskatoon, Ottawa, Toronto, Montreal, and Halifax (plus a team from St. John’s) sending representatives to the 16-team event.

“ ”Curling is a great sport to meet and connect with people and it brings various communities together.”

Trevor Harris, president of the Keystone Rainbow Curling League, aimed for a fun event for the whole community.

“We’re looking to put on a great competition and show everyone a great time in Winnipeg.”

“We’re hoping for some bigger social events and we’re lucky to have strong sponsors. The Canadian Museum for Human Rights is a fitting place for the reception and the venue has been really supportive.”

Although Harris hoped for a local team to take the gold medal, Vancouver’s Team Thompson cinched the 2016 championship.

Rod Ingram, the skip for Winnipeg-based team, Sheet Faced, has competed in eight CGCC tournaments and placed second in the tournament last year in Toronto.

“It was tough losing on the last rock. It was exciting but disappointing – we’re hoping the home ice makes a difference this year.”

Ingram will be joined by Erwin Maguire, the lead for Team Manitoba, for a total of two Manitoban teams in the tournament.

The competition began Friday morning though players registered at the Canadian Museum for Human Rights on Thursday evening, where curlers received a guided tour and reception at the museum. Additionally, the Keystone Rainbow Curling League hosted 24 teams as part of their annual Bison Cup, which shared ice time with the CGCC at the Granite Curling Club.

The first Canadian Gay Curling Championships were held in 2006 in Edmonton. The championships were created by the founding leagues to provide a competitive event for Canada’s top LGBT curlers in an inclusive and supportive environment.

Jill Officer, a second with Team Jennifer Jones who won a gold medal at the 2014 Winter Olympics, is proud to be involved in the tournament.

"We are really excited to be part of the Canadian Gay Curling Championship. Curling is a great sport to meet and connect with people and it brings various communities together. The Gay Nationals is just that and we are proud to be part of an event that represents diversity and inclusion," she says in a statement.

Besides promoting the sporting aspect of curling, the league promotes on and off-ice camaraderie in a supportive and inclusive environment for LGBT curlers and their friends.

The Keystone Rainbow Curling League is in its 12th season of weekly play at the Granite Curling Club in Winnipeg. It is the largest LGBT sporting organization in Manitoba, with about 100 active curlers.