From Crisis to Campus

Student refugees share stories of how they found their way here

While refugees flee across borders to hopeful safe havens in Europe, many have found refuge within the walls of the University of Winnipeg (U of W).

Many organizations help refugees from all over the world settle in Winnipeg, and one can be found on campus. World University Service of Canada (WUSC) was founded in the 1920s and has had a chapter at the University of Winnipeg for the past 20 years. Locally, the organization has helped more than 20 refugee students gain an education and find a home in Winnipeg.

Most of WUSC’s work is done by volunteers who help the refugees get all the paperwork done, transfer credits for their study and adjust to their new life here. These dedicated volunteers are a connection to the larger world outside the university, and they try to reach out to the best of their abilities so that they can help people, give them opportunity and give them a chance.

While reading stories about refugees in the news, we might not take a moment to look around and realize the friendly classmates we see almost every day are the main characters of those stories. Nevertheless, they are here, studying the same subjects, eating in the same cafeteria and doing assignments just like every other student. And they have this chance because people, who were not so long ago only reading an article about refugees, devoted their time to create an opportunity.

WUSC is a Canadian non-profit organization which provides education opportunities to refugees from all over the world.

“WUSC is a very broad organization and it aims to help refugees. It’s helping refugees through education,” Hazim Ismail, University of Winnipeg WUSC chapter chair, says. “We do a lot of the admissions work and resettlement work.”

“(Our) budget tends to include two students a year, for one year each,” Ismail says. “This includes (an) allowance of around $500 a month. This includes phone, laptop allowance, includes housing. Tuition fees are waived.”

Still, the process of getting a student here is not easy.

“They apply (at) the refugee camps and they go through English training, and then they take an exam. And with exam comes an interview to see their suitability,” Ismail says.

“Then after the interview they have their status approved by UNHCR (United Nations High Commissioner for Refugees) and everything is approved by Canadian immigration. Then we get the names and we get their essays as to what they would like to study, their story, which sometimes is hard to read because it’s really rough.” 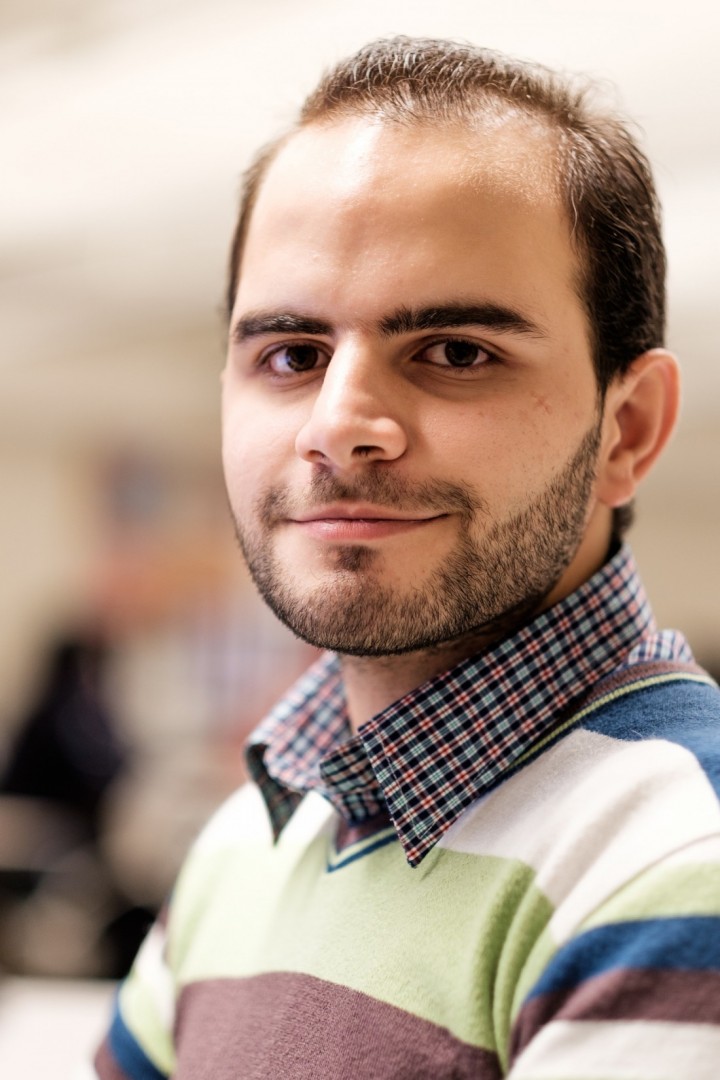 Musa Talluzi is a refugee from Syria who arrived in Winnipeg in August 2015. Photo by Daniel Crump

Musa Talluzi is a 23-year-old Palestinian who was born in Syria and lived there until he fled to Lebanon in 2012. He came to Winnipeg in August 2015.

“I was a refugee in Lebanon for three years and I applied to WUSC student refugee program,” Talluzi says. “They resettle refugees to Canada and they give them an opportunity to pursue their higher education.”

Currently he lives on campus and is taking an undergraduate program in computer science. WUSC covers his tuition and living expenses and helps him in his everyday life.

“You have friends here to help you for whatever you need,” he says.

“Living there (Lebanon) is so hard for refugees,” he says. “It’s costly and there is no opportunity to work and neither to study.”

What are some challenges you faced when you came here?

“You need to learn how to do everything… Maybe the lifestyle is more challenging, but with time it’s all easier everyday.”

“People here are so kind and so friendly, so whenever, from the first time you meet somebody new he turns out to be your friend.”

What would you advise to newcomers to Canada?

“Life here is not so hard as many people may think. Especially because people are so friendly here. Don’t be afraid of coming. Just be open-minded and you’ll like everything here.”

Mohamed Abdi Mahamud is a 26-year-old student from Somalia. He moved to Canada in 2009.

“I came here to follow my studies, to get a better life, get a country I can go home (to), because I was basically from the refugee camp in Kenya,” he says.

“Going to Canada was an opportunity for me to follow my studies and to change my life, and the lives of so many people that depend on me.”

Mahamud graduated from the U of W in 2012 with a bachelor of business administration. The opportunity to study here was provided by WUSC, which paid for his school and life necessities and guided him through his journey here.

“WUSC was just like my second mother basically,” Mahamud says.

Now he is a Canadian citizen, and pursuing a graduate degree at Brock University in Ontario.

What are some challenges that you faced when you came here?

“We were the first Somali students who came to the U of W, so we never had someone before us there to give us guidance and counselling, like mental and moral support.”

“I’m now a Canadian! I come from Somalia where there is no stable government. So now I became someone who has rights and freedoms.”

What would you advise to newcomers to Canada?

“Always try to have an open mind, let them (refugees) ask questions when they need help. Let them also have some financial management in their mind.”

Sarah Tubman was born in 1949 in Liberia. The civil war, which struck the country in 1989, forced her to part with her family, including her 11-year-old son. Tubman became a refugee in Ghana in 1990, after her husband was killed. She lived there alone, without a chance to reunite with her family, until she found out that she had two grandchildren.

“Social services looked for me. They phoned me and gave me these small little children. One was about nine months and the other one year seven months. And I took them,” Tubman says.

In 2013, Tubman and her grandchildren came to Canada as refugees. And even though it was a moment they had long waited for, it was darkened by the missed opportunity to meet with her son, William, who had been looking for her and the children for a long time.

When he finally found them, they had already been in Canada for two months.

Currently with a help from WUSC and other organizations, Tubman is trying to reunite with William here in Canada. He is 37 now and she hasn’t seen him since that haunting day in 1989.

“It’s terrible. And I really need him here,” she says.

What are some challenges that you faced when you came here?

“We didn’t know anyone. Some people rejected us, but we had overcome that.”

“I’m not afraid of anybody attacking me again. Everybody (looks) at me as a human being. Before, where I came from they looked at me as being nothing, but here I realize people accept me for who I am. They respect my rights as I respect their rights. And they respect me for who I am. And I’m happy about it.”

What would you advise to newcomer to Canada?

“Learn the language. Go to the conversation classes. This is our new home. We should be able to contribute to the society.”