From Baffin Island to Berlin 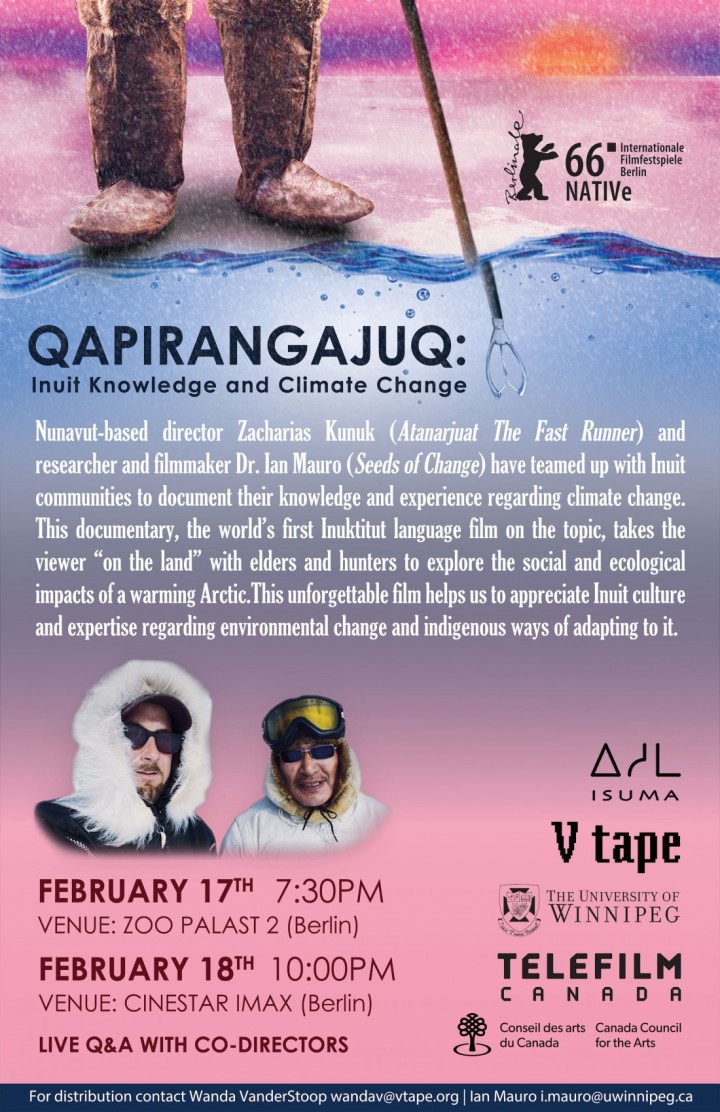 A film by the University of Winnipeg’s Ian Mauro and Zacharias Kunuk has been invited to screen at the 66th Berlin International Film Festival, Berlinale.

Qapirangajuq: Inuit Knowledge and Climate Change was co-produced by Kunuk and Mauro and will be presented in Berlin as part of the festival’s special series, NATIVe – A Journey into Indigenous Cinema, on Feb. 17 and 19.

Mauro and Kunuk finished the film in 2010, making it the world’s first Inuktitut-language film on climate change. It takes viewers across the northern landscape with elders and hunters to explore the social and ecological impacts of a warming Arctic.

The film has won numerous awards, and has been screened at numerous venues including the Smithsonian Institution, National Geographic, ImagineNative and APTN, and has been hailed as groundbreaking by the Globe and Mail.

“ “We know what we have to do. The real barrier in terms of sustainability is that human sphere. It’s about people’s attitude, it’s about how they think about the world.”

Now, six years later, the film has been invited to the Berlinale, considered one of the most important film festivals in the world.

“I think it shows we were ahead of the curve. Climate change is serious, its impact on indigenous peoples is profound and we’re still trying to figure out what to do about that and this film is an important part of that conversation,” Mauro says.

“In many ways when climate change is mentioned people think about a polar bear and what this project does is it puts a human face on the issue.”

Mauro, an associate professor in the department of Geography at the University of Winnipeg, is also a community based filmmaker who entered the field of cinema while working on his PhD.

“I have always been interested in the knowledge of local people and the important contribution it can make to an understanding of environmental issues.”

“I make films that allow people to retain their own voice and their own knowledge,” he says.

“ “(Our goal was to) let the people who live in the Arctic to express themselves, share their knowledge.”

For his postdoctoral research, Dr. Mauro was planning to pursue the Arctic-focused climate change project and that’s when he met Zacharias Kunuk.

Kunuk is a well known indigenous filmmaker, winning the Camera d’Or at Cannes Film Festival for his film Atanarjuat The Fast Runner, which was also named by the Toronto International Film Festival as the number one Canadian film of all time. He is also the president of Igloolik Isuma Productions, Canada’s first Inuit-owned independent production company.

Kunuk says that many people view climate change with their own eyes.

“Everybody’s noticing the climate change. As a matter of fact, we usually freeze up before Christmas in my community up to Baffin Island and this year, end of January, even February wasn’t frozen. So there is a big change that’s coming on,” Kunuk says.

“(Our goal was to) let the people who live in the Arctic to express themselves, share their knowledge. We were asking the same question when we were visiting communities and getting the same answers,”

Mauro believes that many technical solutions required to create a more sustainable world have been worked out, but that may not be enough.

“We know what we have to do. The real barrier in terms of sustainability is that human sphere. It’s about people’s attitude, it’s about how they think about the world. For me, media is a very powerful tool to get people thinking in different ways.”