In March of 2016, artists Elvira Finnigan and Lisa Wood transformed the University of Winnipeg’s Gallery 1C03 into a temporary dining hall. The duo recorded university staff and students’ meals using time-lapse photography and preserved their meals through less conventional chemical processes. Using the materials gathered from that initial luncheon, Finnigan and Wood have produced a variety of unconventional works of art in their follow-up exhibit, Cafeteria II.

Food is often explored in art, but it’s rarer to see the act of eating explored so thoroughly as a work’s sole focus. The artists explore this theme through their own respective media, with Wood using the visual and Finnigan the tactile, the physical. The two work in tandem to craft a layered representation of what it is to eat.

Wood’s most prominent works are a series of hanging paintings focused on the diners themselves. Mouths open in conversation or in the act of taking a bite, the works comment on the communal aspect of eating, particularly in a cafeteria setting.

There’s a distinct difference between dining at home or a restaurant and eating in a cafeteria or commissary. Wood is interested in that specificity. Interestingly, there’s little attention paid to the food. Wood is more interested in how setting, company and other extra-culinary factors influence a meal.

In fact, the word “meal” could be a bit generous. Unlike more formal settings, there’s a perceived disposability to cafeteria eating that both artists present. Wood’s distracted diners, mired in the mundanity of daily routine, seem even less interested in the food than the artist. None seem to relish their food. Painted on transparent mylar film, they have a ghost-like quality, as impermanent and transient as their food.

Finnigan explores similar themes, though with a different media and a different focus. Instead of diners, she examines the detritus left behind from the meals. Using a salt brine, Finnigan has preserved dirty tabletops, food leftovers and discarded cutlery. Any cafeteria eater who has neglected to bus their own table will recognize the scummy rings left behind by glasses and plates, the napkins or the delinquent french fry.

But by preserving the ignored remnants of a meal – be they orange peels, dirty plates or tea bags – Finnigan puts in sharp focus how much we leave behind. It’s easy to think of eating purely as an act of consumption and thus, subtraction. Seemingly contradictory to that understanding is the reality that we create as we consume, that waste makes the act of dining as much about addition as subtraction.

By reframing something as routine as a cafeteria lunch in this troubling way, Finnigan raises questions about other types of consumption. What other seemingly innocuous daily tasks leave a similar trail of detritus in their wake? The exhaust from the bus ride home, the runoff water from a shower or the hair swirling down the drain after a morning shave suddenly take on unsettling connotations. It creates discomfort through self-awareness, reminding the viewer that to exist is to create waste and that seemingly insignificant daily feats are, in some way, permanent. 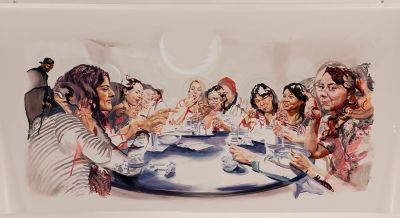