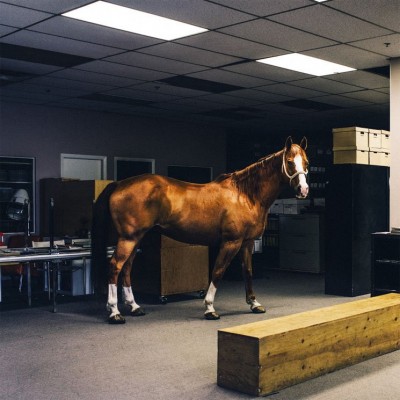 We Are The City’s newest LP, Above Club, was born at breakneck speed. Recorded in a makeshift studio located above a nightclub in Serbia, the album was completed almost as soon as it began. A month after posting a 24/7 stream of their recording process, the band had their third, and best, full-length available to the world.

Perhaps it was the limitations that created the best collection of music that this oft-touring, fluidly creative trio has put out.

Lead singer Cayne McKenzie has admitted that many of the vocal hooks and lyrics in the catchiest tunes were improvised and recorded in one take. Lines like “Whatever God is, it’s here with me now”, the repetitive hook in “Keep On Dancing” will sink its teeth into your subconscious until you’re inadvertently gyrating to the phrase while trying to keep warm at a bus stop.

“Keep On Dancing” is the most accessible, pop-forward track on the album, with its bombastic drums and hooky chorus, and in many ways, this may be both We Are The City’s most accessible and interesting album.

The progressive stylings of their previous efforts shine through on tracks such as “Cheque Room” and “Sign My Name Like Queen”, while maintaining a new appreciation for pop stylings.

The hooks come in both the music and the vocals, with almost every track throwing yet another memorable melody or interesting rhythm that will have you revisiting again and again.

The album’s first track, “Take Your Picture With Me While You Still Can”, kicks in with an incredibly dynamic dance-based rhythm and is easily one of my favourite tracks of the year. “Kiss Me, Honey”, the other bookend, has a tongue-in-cheek reference to their newfound pop mastery in the chorus: “I pop hooks like jokes in the funny paper”, which really is one of the best one liners I’ve heard in a long time, as smarmy as it may be.

This is one of the best albums that 2015 had to offer. A tall claim, to be sure, but trust me when I say that you will be nothing short of satisfied, and possibly even hooked.