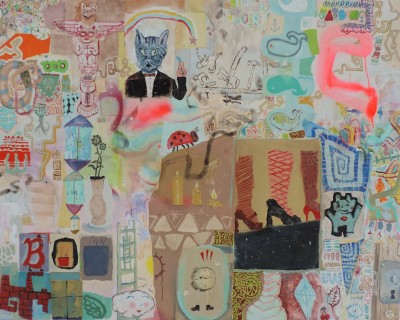 The title of Shaun Morin’s current exhibition at Lisa Kehler Art + Projects, The Quiet Crescendo, has profound implications for the art it showcases. Beyond the obvious musical connotations (which the show certainly delivers on), Morin’s work is a constant push and pull between seemingly contradictory ideas or forces.

A crescendo, the feverish peak of mounting aural intensity, emerging as a whisper lost in some larger cacophony, is a powerful thesis underlying a stimulating exhibition.

Visually, Morin’s work is pleasurably chaotic. There’s a melancholy and a humour obvious in every image, particularly in his use of cartoonish figures, which often recall early animation styles like those of the Fleischer brothers in the 1920s and ’30s. But the work suggests more complex ideas and emotions in its structure.

Each painting could be a collage, an erratic tapestry of characters, patterns, pathways and movement which expand through space like some sort of bizarre Snakes and Ladders board emerging from a tumultuous subconscious. Images within the paintings can seem disconnected and sporadic, but incongruity always has purpose. Each painting feels like a single constructed mess, rather than a hundred disparate elements.

That central idea of the quiet crescendo forms the conceptual bedrock of Morin’s work. Despite the obvious craft on display, the paintings feel spontaneous, almost as if they’ve emerged from the viewer’s mind. One can’t help but think that this is what the inside of someone’s thoughts might look like. Dozens of dreams, thoughts, feelings and memories are all swimming in a pool together at once. We can’t quite control which will float into focus, or the order in which they present themselves. Maybe it’s ideas themselves that are the quiet crescendo.

The way we approach thought, the way we try to separate and categorize the jobs our brain does, doesn’t really reflect how it actually works. Do we really have singular thoughts or epiphanies? Is there really such a thing as an isolated idea? Aren’t all our most meaningful mental moments linked arm-in-arm to our most humiliating fantasies, our most infantile impulses or sickening heartache?

Even Morin’s starker, less hectic images get at these ideas. Coffee Cloud shows a cartoon rain cloud weeping brown teardrops into a coffee mug. Fleur depicts an aquamarine flower that can barely distinguish itself from its nearly identical background. Around the edges of the canvas, blasts of noisy colour bombard the painting’s subject, which can’t help but struggle to be seen. There’s clearly a joke at the conceptual heart of both paintings, but they also imply a real despair that lingers in the most seemingly mundane parts of our lives.

That’s not to say The Quiet Crescendo is a downer. Well, it’s only as much of a downer as the mess that goes on inside your brain. It’s also as funny, heartwarming and difficult to untangle. Which is perfect because like our minds, Morin’s work isn’t there to be untangled. It’s utterly original, which only makes it more frightening that the chaos feels so familiar.