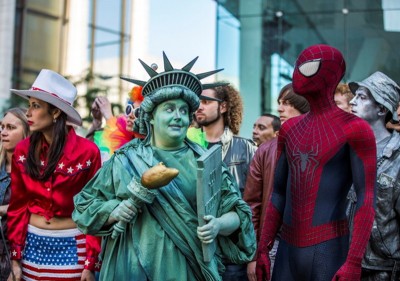 Superheroes are often described as the modern American mythology. I don’t think I fully grasped that premise until Christopher Nolan’s Batman series began while I was in my teens. I’d grown up loving Tim Burton’s Batman, and seeing how Nolan re-imagined it was an important lesson for me. I saw how archetypal heroes like Batman or Superman can be reinterpreted, how their mythological qualities make them diverse cyphers that can be used to explore the themes they represent.

But Spider-Man has never been a mythological, archetypal hero. Like most Marvel properties, Spider-Man is character driven. It’s basically a soap opera. Peter Parker isn’t defined by themes or ideas, he’s defined by his personality. Unlike Batman or Superman, if you change Spider-Man’s personality, he’s not really Spider-Man anymore.

Herein lies the problem with this whole Amazing Spider-Man reboot. This character just isn’t open to varying interpretations. Despite the things this series does well (thank god Spider-Man is funny), there’s just no reason to revisit this material. The Amazing Spider-Man 2 doesn’t offer anything that I didn’t already get from Sam Raimi’s original trilogy less than a decade ago.

If the movie was good enough to justify its existence, I could put all those things aside. But it isn’t. A superhero movie is only as good as its villains. Spider-Man has never had great villains the way Batman does, but Raimi managed to make them interesting. Director Mark Webb (500 Days of Summer) does nothing to make his villains, or even his heroes, compelling. Jamie Foxx is channeling Richard Pryor in Superman 3, which is the only time it’s a bad idea to channel Pryor. Andrew Garfield makes annoying, actor-y choices by constantly twitching and shuffling. Watching him and Dane DeHaan try to act like buds while overacting is painful.

Look, I could go on and on. But really, the best advice I can give you is to go rent Raimi’s Spider-Man 2. It’s 10 years old, but it’s more vital than this one ever will be. Also, Alfred Molina.