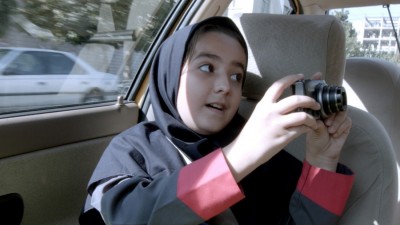 Jafar Panahi shows – perhaps more than any other filmmaker – how making movies can be a revolutionary act.

The dissident Iranian writer-director caught the ire of his home country’s oppressive government with films like The Mirror and Offside. In 2010, Panahi was placed under house arrest and served with a 20 year ban on making films. He immediately made This Is Not a Film, which famously premiered at Cannes after being smuggled out of Iran on a USB flash drive hidden in a cake.

His newest, Taxi Tehran, is another covertly-made piece of cinematic contraband that blurs the line between documentary and fiction. Shot entirely on taxicab security cameras, Panahi drives a cab around Tehran and picks up passengers who may or may not be actors. The film ignores traditional narrative, plays out in real time and depicts mostly ordinary events of daily life.

That premise might sound simple. In the hands of any other filmmaker, it could be excruciatingly boring. It’s a testament to Panahi’s masterfully deft hand that every frame of Taxi Tehran is riveting.

It’s easy to make dissident art when the work is incendiary. Panahi’s dissent is quiet and calm, which only makes it all the more astonishing. His oppressed characters aren’t holy warriors fighting against evil. They’re ordinary people living ordinary lives in a world where morality isn’t black and white. That mundanity doesn’t lower the stakes of their dissent. By humanizing them, he highlights the courage of their quiet revolution.

That humanization extends to his depiction of Tehran itself. It’s in stark contrast to the image of Iran portrayed in Western media, and the image Iran projects of itself to the rest of the world. One could easily mistake it for Winnipeg if they weren’t looking too closely. The issues his passengers discuss aren’t just about dictatorship. They talk about petty crime and income inequality, basic things.

Panahi’s style is as quietly revolutionary as his politics. He’s always delighted in calling attention to the limitations of his medium (The Mirror focused on a protagonist who gets lost inside her own film). With his government-imposed ban, he has a whole new set of limitations to play with. The conceit of the security cameras initially seems like a ruse. “This isn’t a film,” he might tell the police. “This is just footage from my taxi.”

But his onscreen characters immediately question it. “You’re making a movie, aren’t you?” asks one of his earliest passengers. “Those other passengers were actors, right?” We’re wondering too. We’re wondering if the inquisitive passenger is an actor as well. Panahi just smiles to himself, saying nothing.

Panahi’s act of defiance is an argument for film’s essential role in our global cultural dialogue. His ban seems increasingly absurd as we realize that everyone around him is filming everything. Cellphone cameras are ubiquitous. Security footage outside the taxi also plays a role. A college-age film student and Panahi’s own young niece both ask him for advice on film projects they’re working on.

Panahi’s niece reads him the government-imposed rules her film must follow to be shown in Iran. It’s a delight to realize that, without us noticing, Taxi Tehran breaks every one of them.