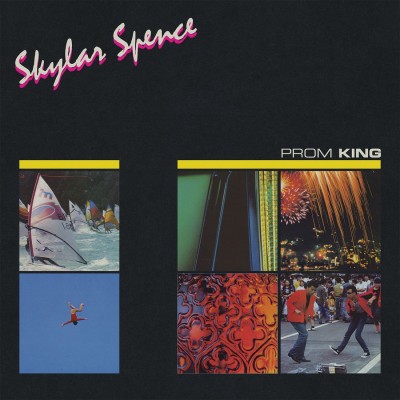 At the beginning of the year, Brooklyn producer Saint Pepsi announced that he was dropping his anti-corporate non-branding title and adopting the moniker ‘Skylar Spence,’ ostensibly due to the myriad legal troubles that come along with having a name like Saint Pepsi. Quite likely, this name change also came about as part of the progression of Spence’s sound, which has moved away from something classifiable as part of of the meme-genre Vaporwave and towards something more unique.

His debut album Prom King, finds Skylar—real name Ryan DeRobertis—ditching the lo-fi, sample-reliant trappings of Vaporwave while maintaining the dance-floor-ready appeal present in the disco and funk re-appropriations the genre is best known for.

“Bounce is Back” stands as the best example of the fusion of these two styles, it’s like a Vaporwave track with high production value, complete with vocal chops and drums that sound like they were recorded in the ‘80s. Prom King’s production is strong across the board, the album’s 11 tracks are poppy, light and fun—it sounds like someone making a disco-pop album through a ‘modern’ lens.

Songs like “Affairs” and especially “Can’t You See” have production that calls to mind similarly-influenced acts like Chromeo or Scissor Sisters. These big, glossy tracks are undoubtedly influenced by Spence’s new live show which has moved from a one-man show to a full ensemble. This is great, as the energy present in these tracks is something that would be best recreated with a live band (and best experienced in a small-ish, packed venue).

The album’s only drawback is Spence’s vocals. He is by no means a bad singer, but he does not have the sort of voice that makes you instantly want to sing along - especially in this setting he has placed himself in. Spence’s middle-of-the road vocal tone does not detract, but doesn’t always have much to add.

However, this is a producer who has only been using his own vocals in tracks for about a year - they will continue to progress. The multi-part harmonies in choruses and elsewhere are definitely a step in the right direction; it is usually in the verses where his voice can be a bit bland. Once his vocal chops catch up to his production capabilities, Skylar Spence could easily become a pop music force to be reckoned with.