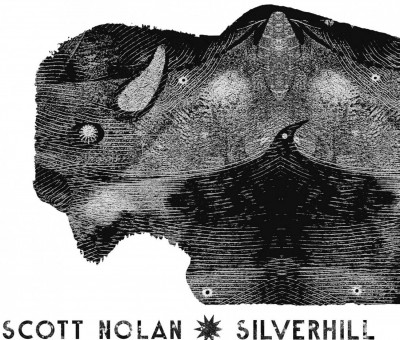 Scott Nolan sings songs with an elegant simplicity and a rollicking roots groove. His new album, Silverhill, is a down-to-mid-tempo assortment of tunes for the mournful and musing, for the purged and purging, and for the playful and longing.

A Winnipeg-based singer-songwriter, Nolan recorded Silverhill live over two days in a home near Loxley, Alabama, and went into the production of Silverhill with “no demos, no preproduction”, saying that he “would sing a song once and we would roll.”

His goal was “to tap into that ancient southern musical wisdom, fall into that lazy groove, and let the sessions produce themselves.” That’s putting a lot of faith in spontaneity, and for Nolan, faith and spontaneity seem to have paid off.

The album’s second track, “Forever Is A Long Time”, is a soothing, swaggering folk number that’s bolstered by twinkling twangs and heady harmonics that bring to mind thoughts of warm summer nights spent with friends, swayed by the happiness of the moment, contemplating on the life ahead, and all the details that might fall in between.

Or there’s the funky roots groove of “Shake It Loose”, the sexually allusive “Twister”, or the blues boogie of “Little Dream”, that mark the album with spots of momentum before bringing the tempo back down for the slow and scenic routes. These are songs with a warm and welcoming sound, an earth-bound quality, and are grounded in rustic, home-bodied production.

Nolan has a knack for bittersweet lyrics, poignant melodies, and catchy choruses. Many songs on this album evoke feelings of triumph through the truths and recognitions of the unavoidable changes and chances that occur throughout life, and the emotions and thoughts that come with them.

Silverhill is full of memorable melodies and earthborn earworms. Nolan brings to us an album for those times when life shows us just how beautiful it can truly be, despite knowing that one day it will all be over.