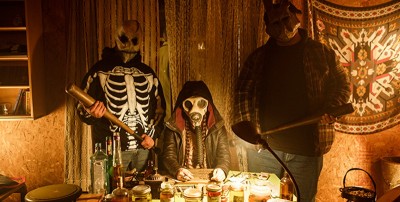 Plays May 15-22 at Cinematheque

Director Jeff Barnaby’s debut feature, Rhymes for Young Ghouls, is about the darkest parts of Canada’s history. Its greatest strength is that it isn’t niche in its Canadian-ness. It’s a universal story about oppression that can be understood by anyone, anywhere.

Set in the mid-‘70s, the film takes place on the fictional Red Crow reserve, a poverty-stricken community living under the dystopian regime of the Indian Act, with violent government thugs and a residential school running a mafia-like empire over the locals. The film is most compelling when we see how the locals react to their oppression. Some are victims, some are complacent, some resist.

Barnaby’s dialogue can sometimes be stilted, but he does a good job creating a sense of time and place. The community in the film is as real as it gets. It’s an authentic world rarely depicted on film, and Barnaby gets it right.

At the centre of the film is a fantastic performance by Kawennahere Devery Jacobs. This was my first time seeing this young actress, but any Canadian filmmaker worth their salt will be clamouring to work with her after seeing Rhymes. She brings to this what other young actresses like Jennifer Lawrence or Shailene Woodley brought to their recent debuts. Her youth and energy never contradict her hardened wisdom and resolve. She’s a true original and a unique screen presence.

The film’s biggest misstep is that it has its feet in two stylistic camps. Sometimes it’s a naturalistic look at this very real community, sometimes it’s an operatic revenge fantasy. Barnaby does both well, but putting them up next to each other make both seem like stylistic exercises. And the thing is, there’s room for both of those movies to exist. The tragedy of residential schools isn’t a single story; it’s the backdrop for thousands of stories that tell a side of our history cinema rarely explores. I commend Rhymes for Young Girls for exploring it well.