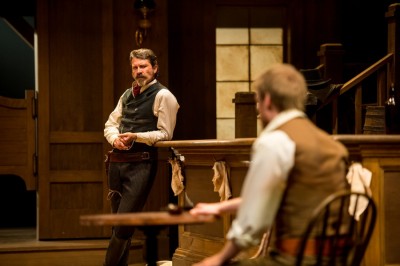 The Man Who Shot Liberty Valance

Readapting The Man Who Shot Liberty Valance is a risky move. Dorothy M. Johnson’s short story was turned into one of the most iconic westerns of the ’60s by director John Ford. It starred Hollywood icons such as James Stewart, John Wayne and Lee Marvin. It introduced iconic quotes like, “When the legend becomes fact, print the legend.” See how many times the word “iconic” came up in this one paragraph?

The story itself concerns an old West town terrorized by violent gang leader Liberty Valance. The town’s ineffectual marshall does little to solve the problem, and only gunfighter Bert Barricune poses a threat to Valance. Suddenly, an East Coast law student named Ransome Foster arrives in town and shakes up the social order.

English playwright Jethro Compton wisely steers away from the 1962 movie, turning his gaze instead to Johnson’s original story, as well as to other works of classic westerns of the screen. His script respects the genre, never trying to be too clever or winking at the audience about familiar western tropes.

For a genre mostly associated with sweeping prairies and vast landscapes, the play never feels stagebound. Johnson’s story is particularly well suited for this.

That’s due, in no small part, to the work of set and costume designer Brian Perchaluk. The set for the Prairie Belle Saloon is intricately detailed and feels so lived-in, the audience is transported before any actors take the stage. It’s enough to make one forget the harsh, unforgiving reality of the old West and wish to hang out there.

The use of actual firearms in the play, supervised by expert Dave Brown, supports that lived-in feeling. This method could easily feel like overkill and it might be a bit much for some viewers. But the visceral response the sparingly used gunplay evokes is worth the risk. There’s something arresting about the smell of gun smoke or pipe tobacco filling the theatre, and it all adds to the tactile quality of the production.

The performances, like Compton’s script, do well in avoiding comparison to their familiar filmic counterparts. Trish Lindström is the real standout as Hallie Jackson, the cynical barmaid who acts as the dividing wedge between protagonists Ransome Foster (David Coomber) and Bert Barricune (David W. Keeley).

While lead actor Coomber isn’t quite up to par with his more subtle co-stars, he and Keeley still manage to explore Johnson and Compton’s thematically rich story. Foster the scholar and Barricune the gunslinger represent two possible futures for the old West town of Twotrees. Liberty Valance is the problem they face.

Essiembre’s take on Valance adds a level of eeriness to this western fable: that evil is a choice and a calculation, not just an impulse. It makes Foster and Barricune’s choice, and the play itself, that much more meaningful.