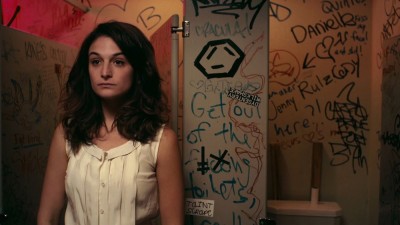 It’s a great time to be a Jenny Slate fan. Those of us who know Saturday Night Live made a mistake when they fired the comedian after one season for dropping an F bomb (despite keeping on mediocre talents like Nasim Pedrad and Vanessa Bayer) have been feeling somewhat vindicated. Her hilarious guest spots on Kroll Show and Girls have shown that she’s a diverse comedic talent, as have her wildly popular Marcel the Shell with Shoes On videos. Obvious Child has confirmed, without a doubt, Slate is a major player on the rise.

Obvious Child is the debut feature-length film from writer and director Gillian Robespierre. It’s the story of Donna Stern (Slate), a New York stand-up comic who ends up pregnant after a one night stand and decides to get an abortion. It’s been described in the press as an “abortion comedy”, but that misses the point. It’s really about the transition into real adulthood, the kind that doesn’t really happen until well into your 20s (which last year’s Frances Ha depicted so well). It’s a refreshingly grown-up movie about decidedly not-grown-up people.

Slate is tremendously good here. Everyone knows she can be funny, but she brings an emotional honesty to this part that she’s never shown before. Gaby Hoffmann and Gabe Liedman are perfectly cast as her best friends. Robespierre’s camerawork treats the material perfectly; it’s never ostentatious, but has a creative point of view that makes the film feel like more than an exercise in mumblecore. The whole thing is complemented by Chris Bordeaux’s playfully plaintive score.

Not everything works here. I don’t think Donna’s stand-up is quite as funny as the film needs it to be. Her job at Unoppressive Non-Imperialist Bargain Books (really) feels a little more Brooklyn than believable. But Obvious Child is still funnier and more heartfelt than anything else in theatres right now.