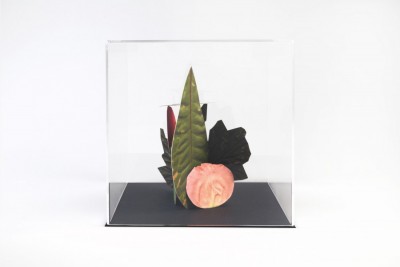 By Ashley Gillanders, Methods of Preservation runs at Gallery 1C03 until Feb. 20.

Winnipeg artist Ashley Gillanders’ exhibition Methods of Preservation is presented as a collection of photographic sculptures.

The term itself is a provocative and seemingly contradictory one. Basic cultural perceptions of photography (and sculpture, for that matter) seem to suggest that the two media are at odds with one another. Gillanders deliberately addresses these perceptions head-on to craft a show that, while aesthetically simple, is rich in conceptual commentary.

The basic premise of Methods of Preservation is fairly simple: Gillanders has photographed bits of house plants – be they leaves, flowers or other bits of indoor flora – printed them to scale and arranged the images into sculptures. The execution of that simple idea raises interesting questions.

There’s an inherent commentary on photography and the fairly narrow cultural role it’s been assigned. At what point is a photograph no longer a photograph? How much manipulation can a photograph be subjected to before we consider it something else altogether? Why isn’t photography open to the fluidity of interpretation we permit other visual media?

By using images of plants in sculptures that are obviously manipulated, she creates an inherent play between what we perceive as natural versus constructed. Images of leaves and flowers instantly suggest nature to a viewer. But with each level of removal from nature – from photography to printing to sculpting and presentation – a new level of unreality is suggested.

This is made doubly suggestive by the fact that the leaves and their photographed doubles look so similar. Both are flat, glossy objects, and one could easily mistake the photographs for actual leaves upon entering the gallery.

The authenticity of the reproductions raises other questions about our relationship to nature. Many of us keep houseplants, and we perceive them as being natural objects. But isn’t a houseplant just as much a construction as one of Gillanders’ sculptures? How much nature we encounter in our daily lives is actually constructed? A man-made park, a farmer’s field and a planted forest are all constructions.

Our landscapes are shaped by human design, and we’re constantly reminded of the global impact of human activity through climate change. We view nature as separate from humanity, but is there any part of nature, no matter how remote, that isn’t in constant conversation with human manipulation?

For all the conceptual heavy-lifting that Gillanders does, from an aesthetic standpoint, the work leaves much to be desired. Which is fine. It’s not the artist’s job to provide us with something pretty.

But it’s worth mentioning that the printed photos of leaves really do look like printed photos of leaves, and not much else. There’s little attention called to photographic process, imperfection or anything to make the prints more than faithful reproductions. It doesn’t hurt the work necessarily. But it leaves Methods of Preservation feeling mostly like an interesting first step to, hopefully, future work from Gillanders that’s as provocative esthetically as it is conceptually.