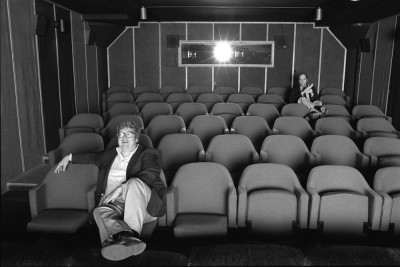 Roger Ebert made me want to become a film critic. His work had an impact on my life that I can’t hope to articulate in under 300 words. The explosion of creativity on his blog in ‘08 and ’09 - shortly after losing his speaking voice - showed me that great film writing wasn’t in a separate category from great writing, and that an essay about Synecdoche, New York could be as profound as a Kurt Vonnegut novel.

For these reasons, it’s impossible for me to separate my personal feelings about Ebert’s work and personality from Life Itself, the documentary about his life. But the first thing I learned from Ebert is that all good film criticism is personal, and it would be wrong to try and separate them.

Director Steve James (whose 1994 classic Hoop Dreams Ebert famously championed) is the perfect match for this material. His approach is pitch-perfect. His fingerprints are all over the film; it’s undeniably his. But the movie belongs to Ebert. Even without speaking, his voice breathes life into the picture. From the hilarious outtakes of him bickering with his At the Movies co-host Gene Siskel to the painful hospital scenes towards the end of his life, Life Itself is a complex and satisfying portrait of a hugely influential man.

There are tons of great interviews, with subjects ranging from Roger’s wife Chaz, to fellow critics, to directors whose lives his work touched. Perhaps the most moving are the moments with Martin Scorsese, who explains how Siskel and Ebert kept him working when he was ready to leave movies. Ebert’s writings on Scorsese showed me how a critic can do more than comment: how a writer can actually elevate a director’s work. With Life Itself, Steve James proves that a director can also elevate a critic’s work.