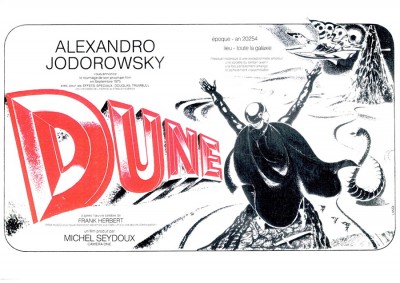 In the 1970s, the surrealist director Alejandro Jodorowsky (El Topo) set out to adapt Frank Herbert’s sci-fi novel Dune into an epic motion picture. Years before Star Wars, Jodorowsky set out to make a science fiction fantasy that would forever alter the collective consciousness. With a budget of over fifteen million dollars and a runtime exceeding twelve hours, Jodorowsky pulled out all the stops. He assembled a team of the finest concept artists, including H.R. Giger, Jean “Mœbius” Giraud, Dan O’Bannon and Chris Foss to design his picture. He assembled a monumental cast that included Orson Welles, David Carradine, Mick Jagger, and Salvador Dalí. Dune was poised to become one of the most important films ever made.

Except it never got made.

Jodorowsky’s Dune is a documentary that tells the story of this ambitious movie that never was. Interviews with Jodorowsky’s surviving collaborators weave together with bizarre images and artifacts of the production, and the result is very entertaining. Director Frank Pavich (N.Y.H.C.) uses animation to bring the storyboards and concept art of Jodorowsky’s failed vision to life.

At the center of the film is Jodorowsky himself, a lovable character whose talent and ambition are matched only by his megalomania and self-importance. It’s a testament to his power as an artist that I found myself rooting for Dune to succeed, even though I knew it failed. I laughed when he audaciously claimed his film would have “mutated” the minds of Earth’s population, but at the same time, I kind of believed him.

The documentary explores how an unmade movie can still impact the collective consciousness. We see Dune’s influence on sci-fi blockbusters, which far exceeds that of David Lynch’s Dune movie that eventually hit theatres in 1984. Such directors as Nicholas Winding Refn sing its praises. Ripples in the water can rock the boat, even when the stone that made them was never thrown.