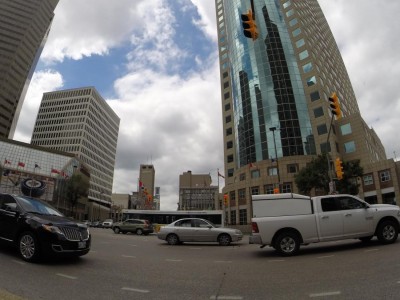 North Americans don’t have to look hard to see the undesirable traits of automobile ownership.

Between car accidents, climate change and traffic gridlock and recalls, the white-knuckle stress of driving hardly seems worth it. Yet the City of Winnipeg, with abysmal cycling infrastructure and an ever-worsening transit system, seems to regard other forms of transportation with total indifference.

CarFree: Stories from the Non-Driving Life explores the lives and experiences of several Winnipeggers who abstain partially or entirely from driving. Filmmakers Janine Tschuncky and Kenneth George Godwin’s refreshingly positive documentary focuses on the possibilities of pedestrian life in Winnipeg and never comes across as anti-car demagoguery. They focus on making car-free life seem possible and fulfilling, while still addressing its challenges.

That’s not to say CarFree is fluffy or toothless. Tschuncky and Godwin explore the ways our culture punishes those who do not drive. They examine the lack of sidewalks in certain subdivisions and other urban planning failures.

Interviewees address the absurd rule that new parents can’t take their baby home from the hospital without a car seat, even if the baby isn’t going anywhere near a car. They’re all alarming forces that make many feel forced into car ownership.

The film isn’t much to look at or listen to. It’s not necessarily a bad thing, but it’s obviously a no-budget doc from frame one. Certain topics – like how our brutal winters affect commuting – aren’t given nearly the screen time they warrant. But CarFree remains an informative and entertaining movie, albeit a modest one.