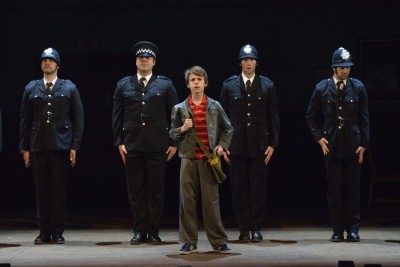 Music by Elton John , Book and lyrics by Lee Hall

Royal MTC’s production of Billy Elliot the Musical is a triumph in nearly every aspect. In a time when most successful stage musicals are adaptations of popular movies from decades past, a show based on Stephen Daldry’s 2000 film Billy Elliot might not seem like a home run idea at first glance.

But this celebration of art, leftist politics and self-expression coalesces into a funny and genuinely moving show that all big pop musicals want to be, but few actually are.

Billy Elliot the Musical is the story of its title character, the 12-year-old son of a widowed, working-class miner in northern England. When Billy discovers a love of ballet, his teacher Mrs. Wilkinson must nurture his gifts while keeping it hidden from the disapproving eyes of the men in Billy’s life.

This is all set against the backdrop of the 1984-85 miners’ strike, during which Britain’s Prime Minister Margaret Thatcher attempted to crush organized labour to prop up her own extreme-right politics. Thematically, the ballet story and the miners’ strike work beautifully in tandem, examining the long-term damage caused by Britain’s class system and the Thatcher administration.

Although Billy is at odds with the working-class men in his life, the rigid social ideas that make it “wrong” for a boy to love ballet are the same oppressive forces that try and keep his community in its place. The parallels illustrate how the bigotry of right-wing tyranny can infect even those who stand up against it.

Elton John’s music is rousing, as is his typical fashion. The score is full of his signature piano flourishes, but also has some period-appropriate flair which manages to evoke ’80s cheesiness without being cheesy itself. Lee Hall’s lyrics occasionally falter, but he sticks the landing when it counts, providing multiple tear-jerkers.

Ethan Ribeiro shines in the role of Billy (Ribeiro and actor Eamon Stocks alternate, playing the role on different nights). He has a difficult role for a young actor. He needs to convey Billy’s progression, going from an untrained dancer to a polished pro. But he doesn’t have the luxury of starting out bad; he must always convey Billy’s natural grace and talent. He succeeds.

The standout performance is Cory Wojcik as Jackie, Billy’s father. Most of the play’s most touching moments come from him, and he humanizes Jackie’s disapproval of Billy so as to never make him merely a domineering bigot.

There are minor nits to pick with performances. The leads aren’t as funny as they could be. But supporting players (particularly Carson Nattrass and Trevor Patt) provide ample comedy.

What’s important is that the leads be brilliant dancers. And boy, are they ever. Tracey Flye’s choreography is fluid and breathtaking, while always managing to feel spontaneous rather than like a routine. Brian Perchaluk’s sets and Charlotte Dean’s costumes do much to set the period, and Scott Henderson’s lighting and shadow-play manage to transport us into Billy’s mind.

There’s no doubt this production took enormous amounts of work and passion to produce. All productions do, but the effort for Billy Elliot the Musical feels colossal. Fortunately for us, every ounce of that passion is onstage, and it’s beautiful.