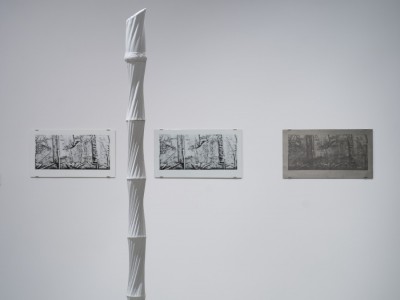 By Grace Nickel at Actual Gallery until March 19

The term “meta” has become an increasingly common descriptor for art in the 21st century.

Maybe it’s a result of the proliferation of all kinds of media into daily life that results in art frequently commenting on itself or its medium. It’s present in our literature, film and even music (can you think of the last time you heard a hip hop song that wasn’t self-referential?).

It’s not often, however, that we hear the term applied to sculpture. Maybe that’s because sculpture has remained largely unchanged for so long. Artistic movements and genres have certainly evolved, but the medium itself hasn’t undergone radical change in the way that, say, photography has.

Winnipeg sculptor Grace Nickel, in her exhibit Arbor Vitae, makes use of new technologies, including 3D printing and laser marking, to create works of sculpture that can’t help but feel like the future of the medium. Her work achieves a self-awareness that, while never ironic or snarky, can still definitely be called meta.

It’s largely through the use of these new technologies that Nickel is able to call attention to the medium through her work. She states that her aim is to explore “the relationships between the natural and the fabricated, the austere and the embellished, flowing and frozen, hard and soft, two-dimensional and three-dimensional.”

She accomplishes this by using textures and shapes that are seemingly incongruous with rigid sculpture. Her sturdy columns seem constructed of feather-light curtains, complete with the tiny woven threads of fabric. Her two-dimensional pieces, made by flattening three-dimensional objects and projecting them onto flat ceramics, play with the eye’s natural recognition of patterns.

These shapes belong on three-dimensional objects, or at least photos of them. The viewer is pleasantly frustrated trying to determine what exactly they’re looking at.

The exhibition’s centrepiece installation, six tree-like columns surrounding another fallen tree structure, is the strongest of her conversations between sculpture and nature. Each porcelain column is constructed of stacked vertical sections, recalling classical Greek or Roman columns. While the atypical textures and forms contribute to the piece, the columns also suggest unsettling skeletal imagery. The stacked sections look undeniably like vertebrae in a spinal column. The capitals that top the columns look almost pelvic and the fallen hollow logs suggest not just trees, but marrow.

What Nickel is doing with this is actually pretty clever. She draws a rarely-observed distinction between the natural and the organic, as it pertains to the human body. It makes the viewer question why we usually regard the former as beautiful while the latter is disturbing.

Tied into those questions is the layout of the installation. The ornate placement of the columns almost recalls Stonehenge. There’s a sort of ritualistic, Pagan tone to it all, its sparseness providing the viewer with all kinds of blanks to fill in.

It all goes to add another interesting conversation of incongruity: Historical architecture versus modern technology, ancient religion versus modern art, nature versus man, cleanliness versus chaos. Arbor Vitae is a wonderfully meta illustration of how they’re all connected in the most gloriously messy way.