What is a city without people?

In December 2017, there was an uproar after the internet got wind of wealthy residents of Bristol, United Kingdom, installing spikes in the trees outside their homes to stop birds from pooping on their cars.

These “anti-bird spikes” are just the latest rendition of an age-old phenomena in urban design.

“Hostile architecture is where architectural elements and the public realm are used to control human behavior,” Dean Harvey, co-founder of Factory Furniture - a company that produces “hostile” benches - says in a 2017 CNN interview.

Others define this architectural movement more specifically. According to Michelle Klimczak, a public health nurse with Winnipeg’s Street Connections, hostile architecture seeks to drive people out of spaces. 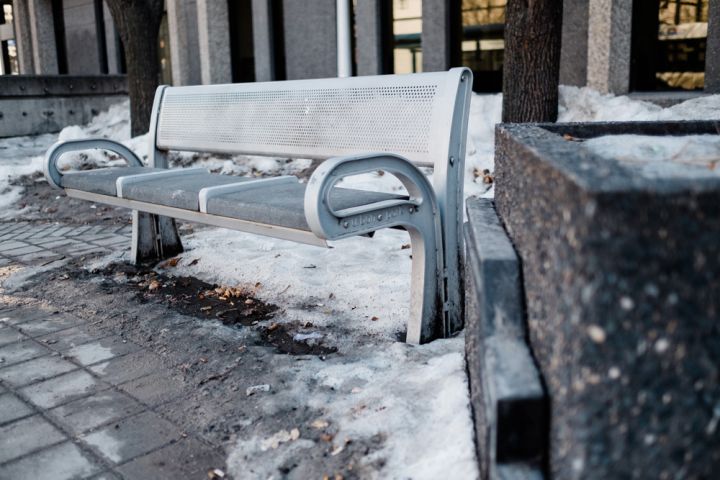 Benches with additional dividing elements can make it difficult for people to sleep or recline on them.

According to Harvey and architect James Furzer, the main targets of hostile architecture are people who sleep outside, people who use drugs and skateboarders.

Existing architecture may be modified (such as a change in bench design that makes it difficult to lie down); elements may be added (like “anti-homeless” spikes or armrests); and elements may be removed, so certain functions disappear (like the 2012 removal of benches from Winnipeg’s Exchange District).

In Winnipeg, some common examples of hostile architecture include: benches with armrests or other features that make it impossible or uncomfortable to lie down, decorative additions on the ledges of planters that stop people from sitting on them and piles of rocks outside of buildings or in underpasses.

In other cities, such as Montreal or London, U.K., the examples are more antagonistic. “Anti-homeless” spikes are installed where people try to sit or lay down, sloped benches only allow leaning (not sitting or laying) and ultraviolet lights make bathrooms uncomfortable.

“I was like ‘oh, really, I’ve seen this!’ I’ve been seeing this for years,” he says. “I’ve been annoyed by it, that you can’t sit somewhere that you should be able to sit, and I was like, it’s systematic. And I didn’t realize how systematic it was.”

Pomeroy believes the spirit behind hostile architecture is classist.

“The ethos behind it (is) ‘Let’s get rid of the poor. Let’s make it so uncomfortable downtown, they can’t be there,’” he says. “We’re sort of doing this with our public spaces, and I just find that annoying. It’s not right.”

“I don’t think you achieve your goal in the end, because people are now just sitting somewhere else,” he says, referring to the decorative additions to the planters outside of Portage Place. “They still have to wait for a bus.” 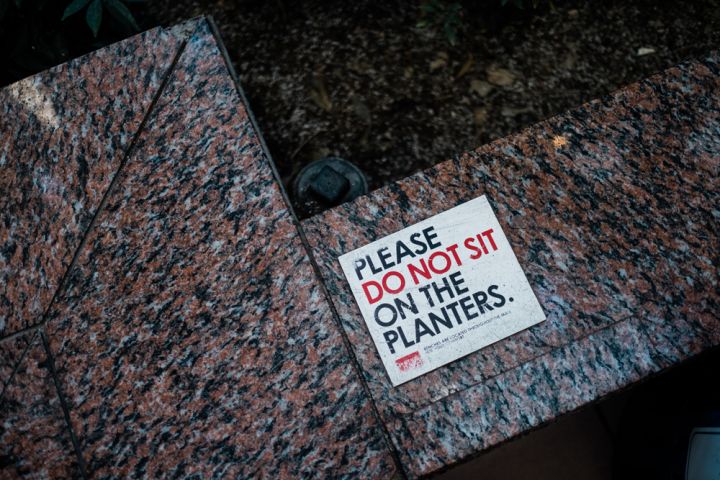 A sign asks visitors to Portage Place Mall not to sit on the planters.

“These small changes to our urban space are happening around us, ostensibly with our agreement, for as long as we refuse to see the city being walled against its citizens, they will keep blocking us from sitting, lying, and playing in the spaces we have paid for,” Pomeroy writes on his blog.

There is plenty of debate around the ethics of such architecture.

“It’s always this idea of balancing how things impact different people,” Klimzcak says. “People in privileged or dominant culture groups are looking to have a positive benefit from any change to a physical environment, meaning ... they would like their perception of safety to increase, but often that would happen to the detriment of a marginalized population group.

“Something happens to the benefit of a privileged group, then that tends to be promoted as the best outcome or the best strategy,” she adds.

Klimczak points to recent landscaping renovations at the Westminster United Church as an example.

“It’s a really nice landscaping project they did in the front yard area, but what it created removed sheltered areas where people would kind of hide out or ... sleep,” she says. “To the average person, it looks visually appealing, and ... it feels nice and seems maybe safer in some ways, but for marginalized groups, it removed a place to congregate for them.

“Everyone’s impacted by it, unfortunately. It’s just in different ways.”

A spokesperson from the City of Winnipeg’s city planning department points out that elements of design deemed hostile serve other purposes. Skate stops prevent damage to surfaces, armrests on benches assist those with limited mobility, and rocks on underpasses discourage people from gathering close to high-speed traffic.

Pomeroy emphasizes the importance of public spaces serving the public.

According to the report by Crisis, hostile architecture is reactionary. It “responds to the calls for action by local businesses and members of the general public. Urban spaces are consequently often sites of contest between official attempts to keep areas open and ‘pleasant’ for ‘everyone’ but while also making them less accessible to those engaged in anti-social behaviour.” 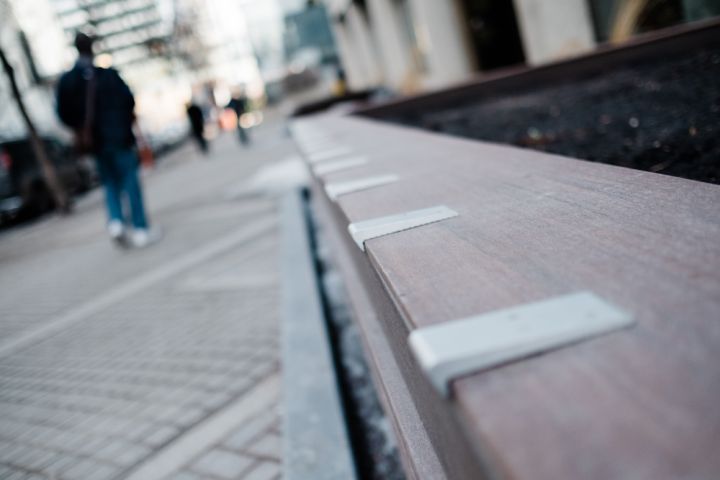 These metal accents are installed to prevent skateboarders from using the planter as a rail.

Hostile architecture looks different in Winnipeg than in other cities. Winnipeg ledges aren’t covered in “anti-homeless” spikes. Instead, there are more “mildly defensive measures” in place.

“Mildly defensive measures” include using sound and colour to deter loitering. Pomeroy points to the classical music that used to be played at the corner of River and Osborne. Another common sound tactic is playing high-frequency sounds that only young people can hear.

“Mildly defensive measures act more like nudges ... and will probably be used more widely than more conspicuous defensive architecture in the future, because most liberal, middle-class individuals react negatively to spikes and similar designs,” Karl de Fine Licht writes in an academic article entitled “Hostile urban architecture: A critical discussion of the seemingly offensive art of keeping people away.”

Klimczak agrees that partitioned seats in bus shelters and rocks in underpasses might go unnoticed, but they effectively stop people from loitering nonetheless.

“They don’t jump out … as ‘hostile’ to the uninformed person,” she says.

Another reason that hostile architecture is less visible in Winnipeg is, according to Klimczak, due to the weather. Harsh winters push people indoors.

“So much of this (poverty) happens in places that we don’t see day to day,” Klimczak says. “It’s not often on the public radar … a lot of people have no idea the kinds of conditions people might be living in if they’re living in poverty (in Winnipeg).”

Klimzcak believes that all is meant well, but those who implement hostile architecture simply aren’t thinking about who it will affect.

“I think this is always done under the guise of safety promotion. I do think most often it comes from a well-intended place, but I think we don’t consider unintended consequences,” she says.

However, the report by Crisis showed that approximately one-fifth of “local authorities” intentionally use hostile architecture to deter people from sleeping outdoors. 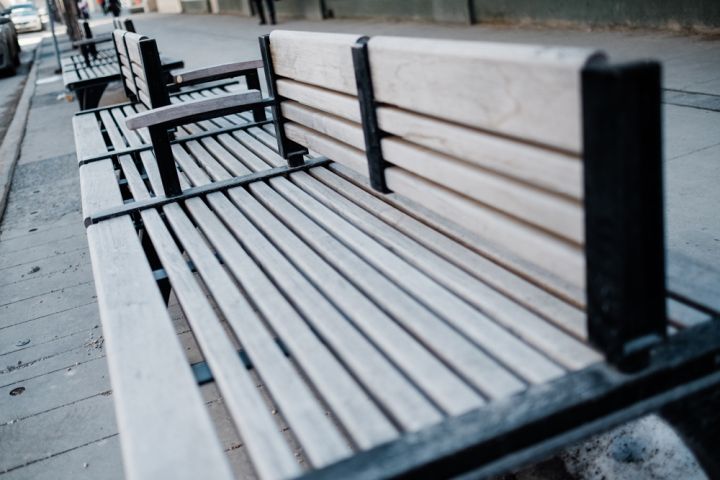 Benches with armrests can make it difficult for people to lay down.

Olivia Mackinnon, a landscape architecture student at the University of Manitoba, emphasizes the importance of public space being truly public.

“We have so many conversations (in class) about not prioritizing (certain people),”
she says. “There are a lot of issues with creating hierarchy in space and delineating space to push certain people out. It doesn’t solve any issues.”

“We don’t like designing neighbourhoods where there is one predominant class. The preference is that there is a lower-income area in a neighbourhood, there is higher income, there is public space so that different people can come together (and) there are accessible amenities,” Mackinnon says.

She adds that neighbourhoods with a diverse population have lower crime rates.

The antithesis to hostile architecture is welcoming public space.

For example, in Victoria, B.C., there is a bylaw that allows homeless folks to camp outdoors between sunset and 7 a.m. A 2015 article in the Globe and Mail estimated that 10 per cent of Victoria’s homeless population chooses to sleep outside rather than visit shelters.

According to the same article, the city of Victoria is also considering building a designated homeless community “complete with so-called micro homes.”

In Winnipeg, Klimczak says that more welcoming measures would include an increase in public washrooms and places to warm up in the winter.

Winnipeg’s last city-operated public washroom, a small building in Memorial Park, was torn down in 2006. In 2007, architect Wins Bridgman opened a public washroom on a piece of city-owned land at the corner of Higgins and Main because he felt there was a need for it, but the city ordered its removal in 2008, because they lacked the proper permits and were “not appropriate at that location,” CBC reported.

“It’s an issue of dignity. People need to be able to go to the washroom. It’s as simple as that. And in a thriving community, you take care of those simple needs,” Bridgman told CBC in a 2007 interview.

Klimczak agrees that access to spaces like warm-up shelters and public washrooms has the potential to improve quality of life.

“I would say in Winnipeg ... our big work on area is looking at ways that public spaces can best contribute to everyone having a sense of dignity.”

Klimczak also points to cycling infrastructure, such as the bike-fixing station outside the Millennium Library. According to a survey done by the public health group, bicycles are the main mode of transportation for people living in poverty in Winnipeg.

“A bike-fixing station and good safe biking infrastructure, that’s the kind of thing that does help population groups that are traditionally very marginalized and left out of city planning decisions,” Klimczak says. 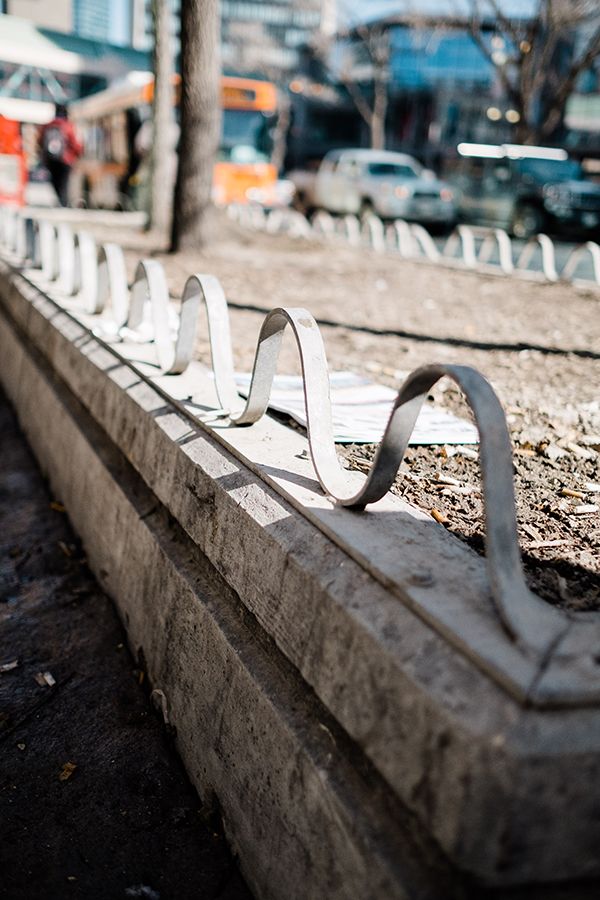 Design details such as this wavy steel atop a planting box can make it difficult for people to sit in public spaces.

“When you have good information about who uses what services, that helps to guide decisions around city planning and infrastructure.”

In Winnipeg, there are many ways to get in touch with city planners and hope to influence planning decisions.

On development sites, there are notices posted that include the planner’s name and phone number.

According to the City of Winnipeg spokesperson, “connecting with the community is typically built into our planning processes - planning initiatives use tools such as websites, open house events, surveys (and) focus groups to engage with the community.”

A final example of welcoming architecture that is gaining traction in the modern world is public phone-charging stations. Locally, there are public charging stations at the University of Winnipeg campus (in Riddel Hall and in the library).

Some cities, like Boston, Mass., are putting charging stations on street benches outside.

“When people are out on the streets, out in public spaces, it literally improves so many layers of quality of life,” Mackinnon says. “Engagement in outdoors spaces promotes people to care about ecosystems surrounding them.”