The Trip to Italy

Brydon recites that famous quote often misattributed to Vidal: “It is not enough that I succeed. My friends must fail.” In many ways, it’s that central idea - the often competitive and narcissistic nature of male friendship - that’s at the heart of the film. As men, many of us want our friends to succeed, but not as much as us, because it reflects poorly on us; it’s all about us, isn’t it?

The Trip to Italy is a sequel to director Michael Winterbottom’s hilarious 2010 film The Trip. In that film, Coogan and Brydon road tripped a restaurant tour of northern England for a newspaper. Here they do the same, but in Italy. The movie wastes no time on set up; within five minutes, Coogan and Brydon are back on the road, and within 10 minutes doing Michael Caine impressions.

If you’ve seen the original, you might be thinking, “this sounds like more of the same.” It really is, but trust me, that’s not a bad thing. This Trip knows why the first one was great and offers more of those key ingredients. It’s pure joy to watch these two agile comedic minds improvise for an entire film. There’s no plot whatsoever. But that’s the point.

Winterbottom is at his best when he’s blurring fact and fiction for comedic effect. He delivers that here. The self-skewering that Coogan and Brydon indulge in under Winterbottom’s direction goes way beyond the kind of light self-parody on shows like Extras. There’s a sense that Coogan the character reveals more dark truth about Coogan the man than the real Coogan could. This is especially funny and poignant because it forces you to recognize the same dark truth in yourself. 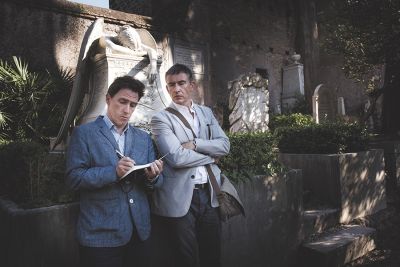