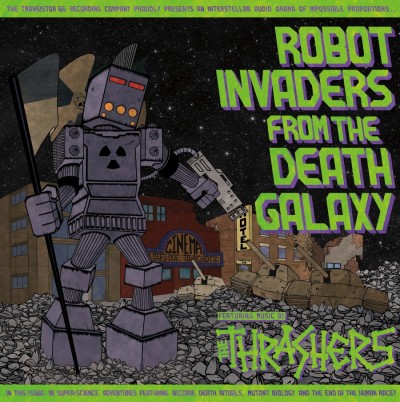 The Thrashers’s new LP, Robot Invaders from the Death Galaxy, is a chaotic twist of groove-infused surf punk that intermixes elements of rock ‘n roll with emphatic jazz momentum. Their whirling, abrasive mix of boisterous styles is an offbeat sound that somehow feels uniquely in place. It’s music that demands a somatic response.

The band’s veneration for styles that groove and grind provides a sizzling backbone of mellifluous wayward force that’s altogether sprightly and dizzying. There’s a reason why DIY punk bands seem to have so much fun.

The unrestrained mix of rhythmic instrumentals, bouncy beats, nervy bass lines, blistering guitar and drum work and the added bonus of humor and thematic images of this world and beyond make this LP a corrosive mix that doesn’t come off at the end feeling like you’ve been burned.

The Thrashers cover a lot of ground, from the funereal Latin-style guitar melody of album opener “Surfers’ Graveyard” to the spurred squall, airy drum flutters, glistening guitar peals, rapid bass flickers and burbling, gravelly vocals of “Underwater,” to the frantic and fearless thrust of the albums title track. Robot Invaders from the Death Galaxy is a colliding force that any punk fan could pogo and mosh around to.