The politics of participation 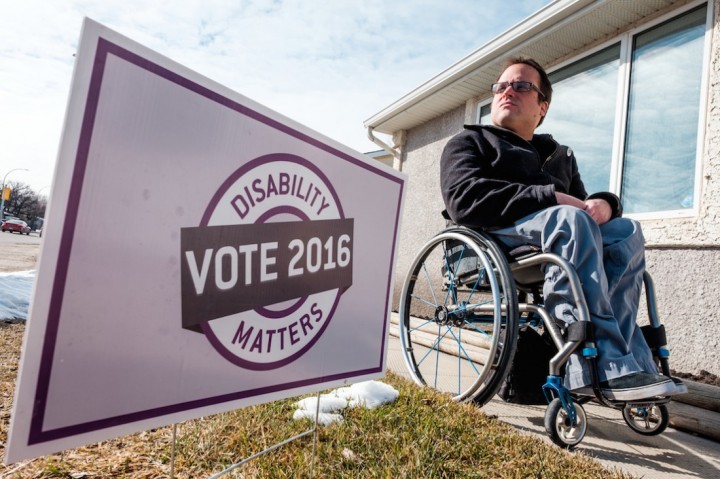 Allen Mankewich is an advocate for people living with dis abilites and part of the Disability Matters 2016 campaign.

For citizens’ coalitions, an inclusive and accessible Manitoba is not only a dream, but a set of tangible goals voters can expect from politicians.

On April 19, Manitobans will elect a new provincial government. Although campaign season often feels like pure drama – who’s ahead in the polls, who do voters like and trust – it’s also a chance for citizens to see where our political parties stand on important issues.

But what are the important issues? And who gets to decide?

Seniors, people with disabilities, and those living in poverty all face barriers to full participation in society. This year, three citizens’ campaigns are trying to change that. Whether they represent you, your relatives, neighbours, or friends, these campaigns inspire hope for a Manitoba where we all have full and dignified lives. 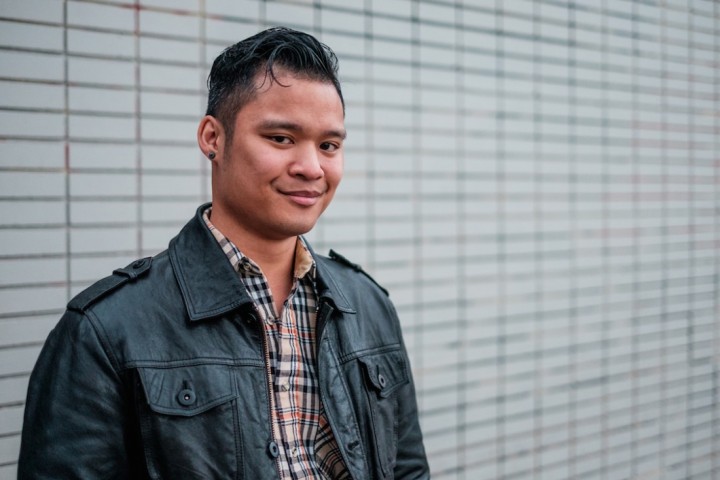 Jordan Sangalang is a member of the deaf community who works at New Directions.

Disability Matters: Vote 2016 (DMV2016), an initiative of Abilities Manitoba and Barrier- Free Manitoba, has identified five priority issues for Manitobans with disabilities. The campaign has also developed a tool kit, voting guide, posters, and lawn signs to spread the word and help people participate in election activities and voting.

“What we’re pushing for is for candidates and parties to state their positions, particularly on the five priority issues, so that when people with disabilities go to vote, they’re aware of these issues and they can use that to make an informed voting decision if they wish to do so,” Allen Mankewich, co-spokesperson for the campaign, says.

DMV2016 wants to see a more accessible Manitoba, fair wages for support workers, better access to disability-related services, stronger leadership on employment, and a dignified income for those who face the most profound barriers to work and economic independence.

Jordan Sangalang, program coordinator at New Directions, has been working with DEAF Support Services to create ASL videos bringing the message of DMV2016 to the deaf community.

A lack of access to ASL interpreters means that deaf individuals experience communication barriers in daily activities like dining out and shopping.

For example, servers in restaurants will explain the menu for non-deaf patrons, and share information about specials. The service offered to deaf patrons can be quite cold, Sangalang says.

“Or, if you go to Safeway or Sobeys, sometimes the cashier might be talking and they might be asking me if I have Air Miles,” Sangalang says. “I’ll ask them to write it down, but often they’ll give me the thumbs up. They won’t actually do that for you.”

The Accessibility for Manitobans Act (AMA), passed in 2013, includes customer service standards that have been in effect since November 2015. However, the government has not yet developed a plan to ensure that organizations comply.

“There’s definitely a lot of barriers,” Mankewich says. “The employment rate for people with disabilities is well under 50 per cent.”

Soon, the AMA will include an accessible employment standard, to be developed through a public consultation process starting in April. Even with these standards, it will be important that the government take action to address misperceptions and low expectations held by educational institutions and employers.

“People find something that they will pick up on as a reason to not accommodate, as opposed to focusing on potential, and why they could, or why they should, be willing to make that possible,” Sangalang says. 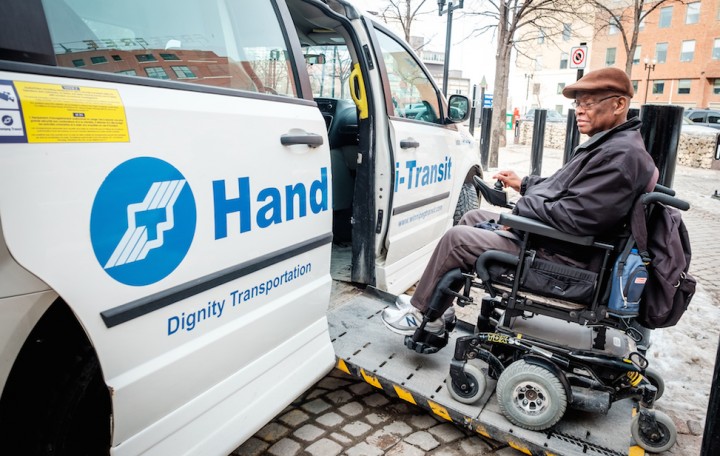 George Russell relies on services such as Handi-Transit to get around around the city.

Seniors Vote 2016 is a coalition of six organizations, spearheaded by the Manitoba Association of Senior Centres (MASC) and the Retired Teachers’ Association of Manitoba.

The goal of Seniors Vote 2016 is “an awareness of all parties, and all older adults, of the collective issues that face all of us as we age,” Connie Newman, executive director of MASC, says.

“Every person over the age of 50, and some younger than that having to look after their parents, are impacted by those pillars,” Newman says.

As we age, being socially engaged keeps us physically and emotionally healthy. Senior centres, places where older adults go for low-cost recreational, exercise and educational programs, bring joy and connection.

However, not all senior centres are funded, and those who are operate with tight budgets and minimal paid staff.

“There are some centres in Manitoba that don’t have any funding at all, and it’s the seniors themselves that have to do all the fundraising in order to pay the bills,” Newman says.

Seniors Vote 2016 would like to see all senior centres across Manitoba receive adequate funding, Newman says.

After older adults give up their drivers’ licenses and have trouble walking places, they can become isolated.

Pam McConnell, coordinator at Transportation Options Network for Seniors (TONS), receives phone calls from older adults and their families who have discovered that they either don’t qualify for Handi- Transit or the services are limited.

“And they’re a bit flabbergasted that more doesn’t exist,” McConnell says. “They’ve seen Hand-Transit in Winnipeg and the bus and Sobeys and Safeway vans, and they see the Handi-van services buzzing around rural Manitoba, and they think that everybody’s provided for.”

In rural Manitoba, cost can also be prohibitive. In Winnipeg, a round trip on Handi-Transit costs roughly $5. Someone coming from the Parklands region into the city to see a medical specialist will pay $600, according to McConnell.

Rural Handi-van programs are hamstringed by a 27-year old funding formula through which the province only provides 37.5 per cent of their operating costs up to $20,000, expecting fees and fundraising to make up the rest.

If McConnell had to pick one priority for our new provincial government, she would have them fix this funding formula.

“It’s equivalent to saying, ‘Handi-Transit, you have to have the world’s biggest bake sale, because that’s how you’re going to reduce your fees,’” McConnell says.

Seniors Vote 2016 has contacted the three major political parties with a list of questions about how they will address the five priority issues if elected. The parties’ responses are posted on MASC’s website to help voters make informed decisions. 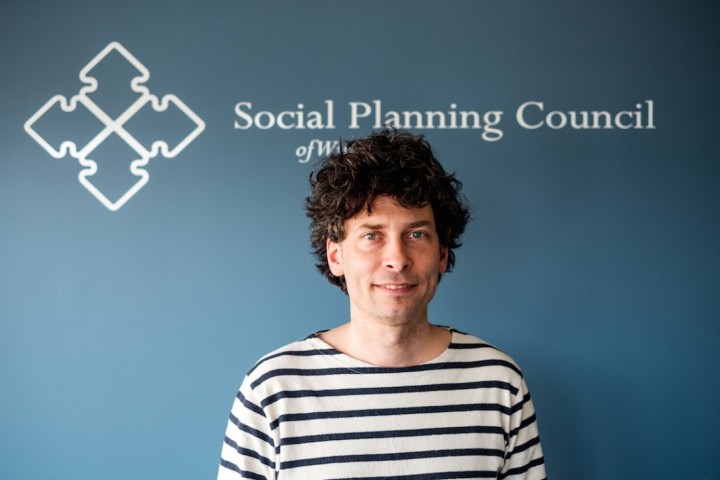 Josh Brandon is the chair of Make Poverty History Manitoba.

KNOW Poverty has a simple but powerful goal: end poverty in Manitoba. This campaign is asking candidates to articulate how their policy proposals will end poverty.

Backed by the Make Poverty History Manitoba coalition, which includes over 100 community organizations, KNOW Poverty has chosen six key policy recommendations from The View From Here 2015, a report by the Canadian Centre for Policy Alternatives.

“Too often, during election campaigns, political parties don’t talk about poverty. They talk about the deficit,” Josh Brandon, chair of Make Poverty History Manitoba, says. “(These things) are much more abstract from the daily realities of people living in poverty.”

Researchers estimate that between 140,000 and 200,000 people currently live in poverty in Manitoba.

For those using Employment and Income Assistance (EIA), their monthly food budget only covers between 40 and 61 per cent of the actual cost of food, according to KNOW Poverty’s website.

“It’s very difficult to participate equally as a member of society if you’re struggling to make your food budget. Everything in our society costs money,” Brandon says.

Yet employment is not the simple solution that some would make it out to be.

“Employment should be a route out of poverty, but unfortunately it’s a trap that keeps people in poverty far too often,” Brandon says. “It takes at least $15.53 an hour to lift a single parent with one child above the poverty line, if she’s working full-time.”

“If you don’t have access to child care, it’s very difficult for single parents to get out and get a job, improve their education, improve their training,” Brandon says.

“And yet child care is extraordinarily expensive, although Manitoba is one of the more affordable provinces for child care. It’s far out of the budget for very low income families.”

Crucially, the campaign wants to see the new government establish targets and timelines on poverty reduction. Although Manitoba’s anti-poverty legislation, the All Aboard plan, has 21 indicators for measuring poverty, there are no associated targets.

“Developing a comprehensive plan with targets and timelines is an important strategic priority for poverty reduction, because you can’t get to where going unless you know where you’re trying to go,” Brandon says.

info For more information or to get involved, go to: