Mavis Staples is one of those rare, talented few whose work and reputation has stood the test of time, both as a member of family gospel band The Staple Singers and as a solo artist. Mavis! is a documentary that examines that career, the woman herself, and her influence.

Director Jessica Edwards doesn’t do much that we haven’t seen in a dozen other music docs: a chronological career retrospective intercut with present-day footage and musical performances. But Edwards doesn’t need to do anything flashy to make Mavis! interesting. This material is inherently interesting. The Staple Singers are so ingrained in pop culture, it’s easy to forget how revolutionary and diverse they were.

From the siblings’ early gruff gospel harmonies over Pops Staples’ quavering tremolo guitar, to their evolution into freedom song troubadours with Martin Luther King Jr., up to their emergence as a premier soul group, the band eschewed conventional boundaries at a time when genres were much more isolated.

The film is chock full of great interviews with everyone from Bob Dylan to Sharon Jones to Chuck D. There’s great footage of Mavis collaborating with Jeff Tweedy, and a particularly moving segment in which she visits Levon Helm at his home in Woodstock near the end of his life. It’s not a particularly momentous visit. The old friends just sit around, strum guitars and sing old gospel songs. It’s a beautiful and intimate moment between two legends, a scene that no filmmaker could fake if they tried.

It’s moments like that which make Mavis! a compelling watch. It doesn’t reinvent the music doc, but it doesn’t need to when the old one sounds so damn good. 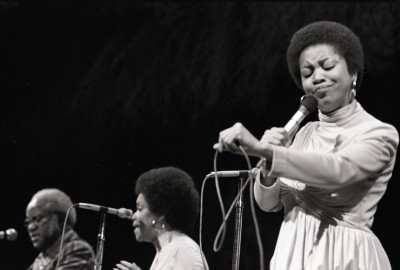