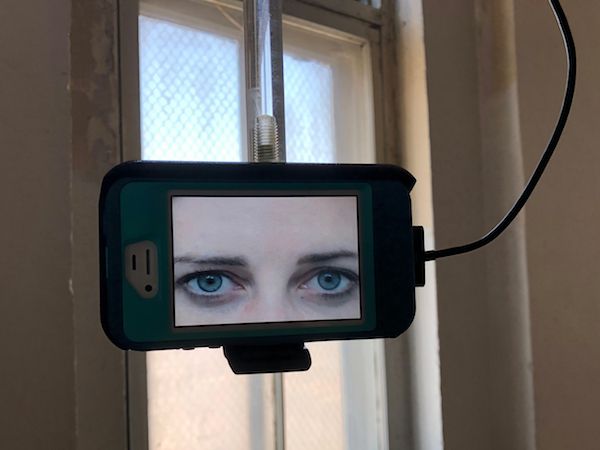 Portal Revisited 2019 is a revision of a responsive installation work that was begun in 1999 but wasn’t completed until this year.  It uses iPhone 4’s to investigate how networked devices for human communication have dramatically transformed the intersections between our bodies, our consciousness and our machines. The phones are programmed to perform a series of specific behaviours that give them the appearance of sentience.

The use of recorded audio and video, rotating motors, video capture to evolve the content, and the phone’s accelerometer for touch response all add to the illusion of consciousness.

The cell phones behave as nodes in a multi-agent system, sometimes appearing to be partially interconnected, sometimes completely interconnected, and at other times entirely autonomous. A small server program handles all of the video, audio and signal activity. When not activated by a viewer, each cell phone muses aloud, creating multiple streams of consciousness. When activated by a viewer, a single cell phone can perform a series of individual behaviors that makes it appear that the phone is conversing one on one with the viewer. It can also combine with the other cell phones to appear to be a single, group entity.

Reva Stone’s work is concerned with an examination of the mediation between our bodies and the technologies that are altering how we interact with the world.  In new installation work, erasure, she is examining that liminal space between what we understand about ourselves and our culture and the intentional and unintentional processes of erasure that are occurring in today’s highly mediated representation of unmanned aerial vehicle (uav or drone) use.

She has received many awards, including the 2017 Distinguished Alumnae Award from the University of Manitoba, the 2015 Governor General’s Award in Visual and Media Arts and an honorable mention from Life 5.0, Art & Artificial Life International Competition, Fundación Telefónica, Madrid, Spain. She has exhibited widely in Canada, the US and Europe, has presented at symposia and has been published in journals such as Second Nature: the International Journal of Creative Media.

The Diversity through Access to Technology + Art program (DATA) provides mentorship, education and career development opportunities to artists with disabilities who are interested in incorporating technology into their arts practice. It is a year long mentorship and includes both mentor and mentee exhibitions throughout the next year. DATA is a collaboration with the Arts AccessAbility Network Manitoba (AANM) and is generously supported by the Winnipeg Foundation and the Manitoba Arts Council, with additional support from Assiniboine Credit Union. For more information about this or our other residency programs please visit HERE and click the DATA tab.