Canadian launch and tour of Second Thoughts by Angie Keefer 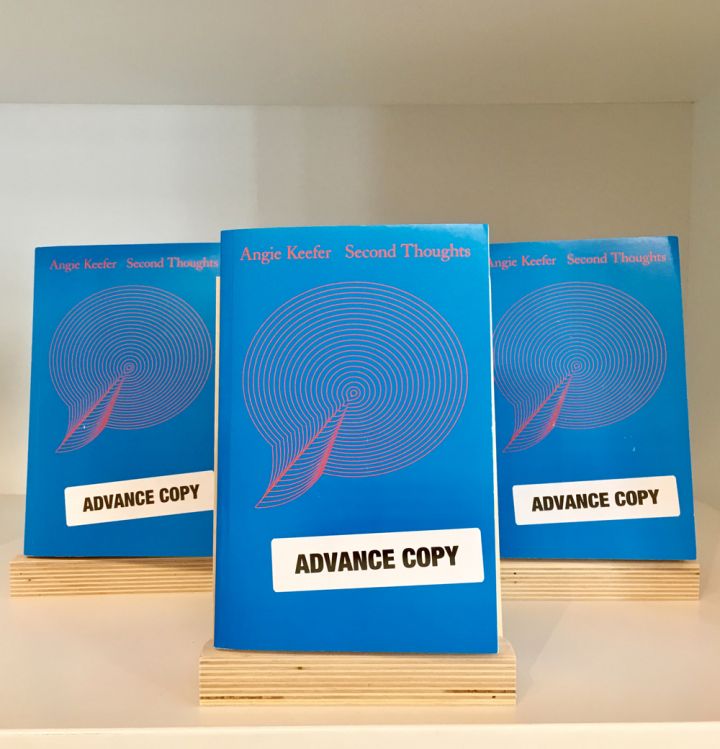 Plug In Institute of Contemporary Art is pleased to announce the Canadian launch and tour of:

"I half hold that my life is a fine ride as long as I don’t attempt to navigate. The least critical way to describe this outlook is “bemused fatalism,” and as coping mechanisms go, there’s much to be said for keeping that faith, but so far it hasn’t proved compatible with ambitious ideas like writing a book, though this may turn out to be the first page of a first chapter, in which case I’ve changed my life and overruled fate with you as my witness."

Plug In Institute of Contemporary Art is pleased to announce the launch of Second Thoughts, a selection of writing from 2008 to 2018 by artist Angie Keefer. This compilation traverses numerous disciplines from physics to philosophy, incorporating biographical elements and running parallel to Keefer’s visual practice.

Without directly addressing her own visual work, the book shadows the artist’s research, capturing her thoughts, travels, and encounters across a broad spectrum of subjects, including octopuses, protons, pictographs, poets, grammar, economy, love, loss, and politics.

At nearly 550-pages, Second Thoughts is long in scope but precisely constructed. Keefer leads readers down vividly articulated paths, documenting her thought processes in an exacting manner that reveals writing itself as a process of formulating the world. Accumulated knowledge is reconfigured through the pacing and cadence of each sentence.

Keefer worked closely with designer Scott Ponik to present this selection of writing as a unified whole while framing each individual text with its own synopsis and postscript. Though all of the pieces have been published previously, many were significantly updated, amended, and rewritten for this edition. Second Thoughts includes an introduction by Maxine Kopsa and a short text co-written with Lucy Skaer. The title is pulled in part from Keefer’s 2017 solo exhibition FIRST CLASS, SECOND THOUGHTS, INTERMINABLE SWELL at Plug In ICA.

Keefer will be in attendance at Canadian book launches for a reading and signing. Launches will be taking place in Toronto at Art Metropole on June 19 at 7pm, in Winnipeg at Plug In ICA on June 20 at 7pm, in Calgary at Esker Foundation on June 21 at 6pm, and in Vancouver at Or Gallery on June 22 at 1pm.

Designed and typeset by Scott Ponik in Portland, Oregon

Printed and bound by Sheridan MI in Chelsea, Michigan

Published in an edition of 1000 by Kunstverein Publishing, Amsterdam and Plug In Editions, Winnipeg.

Angie Keefer is an artist, writer, teacher, and publisher, though the distinctions among these categories are much less definitive in Keefer’s work than comma-separated terms would indicate. Taking an interest in the incidental aspects of art making and its dissemination — from critical & commercial positioning through language, to surrounding labour, and shifting market forces — Keefer often pulls at the stitching that holds the enterprise together. She has exhibited extensively at institutions in the USA and Europe, including Witte de With, Rotterdam (2018); Plug In ICA (2017); Greater New York, PS1, New York (2015-16); Kunstverein, Munich (2015); Whitney Biennial, New York (2014); Objectif Exhibitions, Antwerp (2013-14); and Yale Union, Portland (2013); and has staged performances, talks, seminars, and other series at Artists Space, New York (2015); Liverpool Biennial (2014); Contemporary Art Centre (CAC), Vilnius (2014, 2011); Mercosul Biennial, Porto Alegre, Brazil (2013); São Paulo Biennial, Brazil (2012); and The Museum of Modern Art, New York (2012), among others. Her writing has appeared in numerous artists’ publications, as well as Mousse, Harvard Design Magazine, and Bulletins of The Serving Library.

Plug In Institute of Contemporary Art

Plug In Institute of Contemporary Art recognizes we are in the territories of the Anishinaabeg, Cree, Dakota, Dene, Métis, and Oji-Cree Nations. Plug In ICA is situated in Treaty 1 territory, the ancestral and traditional homeland of Anishinaabe peoples. Treaty 1, was signed in 1871, taking this territory from seven local Anishinaabe First Nations in order to make the land available for settler use and ownership. (referenced from the University of Winnipeg)

Thank you to Kunstverein Publishing, Amsterdam for being first to imagine this publication.

A sincere thank you to Art Metropole, Esker Foundation and Or Gallery for sharing their space to host launches throughout Canada.

Plug In ICA extends our gratitude to our artists, generous donors, valued members, and dedicated volunteers. With special thanks to our Director’s Circle.

We gratefully acknowledge the support of the Canada Council for the Arts, the Manitoba Arts Council, and Winnipeg Arts Council. We could not operate without their continued financial investment and lobbying efforts.

Plug In ICA relies on community support to remain free and accessible to all, and to enable us to continue to present excellent programs. Please consider becoming a member of Plug In ICA and a donor at https://plugin.org/support or by contacting Angela Forget: angela@plugin.org

For more information on this and our other publications, contact Erin Josephson-Laidlaw at erin@plugin.org. For general information please contact: info@plugin.org or call 1.204.942.1043