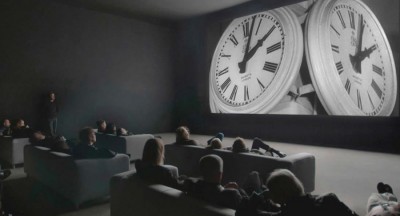 Happening at the Winnipeg Art Gallery

Ever since the dawn of cinema, there has been a growing desire to make extremely long films that stand the test of time. Most modern audiences consider Lord of the Rings: Return of the King as a test to their mental endurance, but at only 4.3 hours it wouldn’t make the top 50 longest running times. Even in 1915, such films as Les Vampires were two times that length. From now until January, the Winnipeg Art Gallery is showing a monumental experimental film that is 24 hours long.

Christian Marclay’s The Clock is an experimental art piece that Is essentially a 24 hour montage of thousands of time-related scenes from movies and TV shows. Each scene contains an indication of time that is synchronized to show the actual time.

If you see the film at 4:00pm your time, it will be exactly 4:00pm in the film. Each scene continues with that time, even if the scene changes, which is does over hundreds of thousands of times. If the scene lasts three seconds, the next scene’s time will be 4:00:03 pm, even Marclay has put the seconds into account. This experimental picture is a labour of love, to find 100,000+ scenes with different times would be an extremely difficult task itself, but to synchronize them and put them in order would seem to be near impossible. Only the mad would put themselves and their editors through such hardship.

Another brilliant aspect of The Clock is the use of sound. Each scene’s sound is synchronized with the next to make the film more fluid. If the noise increases, it is a steady increase rather than a brutal mix to the ears. This is another level of editing genius. In addition to being technically well made, Marclay’s piece is actually quite fun. Have you ever wondered what characters in film and TV do at 3 am? They’re not sleeping that’s for sure.  Marclay also exposes our dependency to time, showing that even in the fantasy world we are dominated by it.