Proportionately speaking, fewer teenagers live downtown compared to elsewhere in the city, while the opposite is true with young adults. 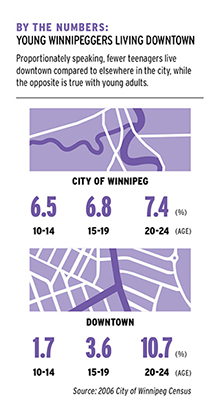 With its scattered mix of familiar watering holes, charming dive bars and nightclubs, downtown Winnipeg is a favourite entertainment destination for adults across the city.

But for teens legally allowed to drive, but still outlawed from having booze in their blood, the notion of gallivanting downtown at dark is becoming more passé than ever before.

For Brooke Richtik, downtown is more of a day trip.

The 16-year-old University of Winnipeg Collegiate student and East Kildonan resident says she rarely makes her way to the city centre except for classes, instead opting to spend time at friends’ houses when hanging out after school.

Part of the reason she tends to stay out of the downtown depends on a perceived lack of things to do there, Richtik says.

Older teens, who are able to move about independently via car or bus, yet prohibited from entering pubs, clubs and many music venues, find themselves in an awkward phase wherein the downtown seems to have little to offer.

“If there was a place (to go to when downtown), maybe I’d go more often,” she says.

The law certainly doesn’t seem to be preventing teens from partaking in such adult activities elsewhere in the city.

Stac Harder and his friends often hang out downtown, particularly at community centres and gymnasiums where they can play basketball.

Harder thinks the issue of underage drinking can be attributed to a mixture of wider cultural problems in addition to a lack of alternative activities for teens.

“It seems like something a lot of teenagers are going to do, either way.”

While some spaces like cafés, bookshops and clothing boutiques are open to minors, they’re not necessarily attracting the younger crowd.

Laura Clark, manager of The Fyxx on Broadway, says the popular coffee shop is usually filled with caffeine-craving university students and nearby office workers.

She sees few teenagers come through its doors - or any other doors nearby, for that matter.

“You have to be spending money to spend time downtown,” she says.

“Teens just want to hang out and watch people; there’s not really anywhere for them to do that in this area.”

However, it’s not just a lack of cash and access to liquor keeping underage ‘Peggers from venturing into the heart of the city but a cultural shift manifesting itself in full force.

Jino Distasio, director of the University of Winnipeg’s Institute for Urban Studies, says the relationships teens have traditionally had with the downtown has seen a substantial shift over the last several decades.

“They’re not coming to hang out at Portage Place as much (with bigger malls in the suburbs), the downtown theatres are finished, the entertainment opportunities like the arcades of the ‘80s are long gone and they’re likely not hanging out at the new bistros and restaurants or going to $300 Jets games (without their parents),” he says.

Distasio recalls interviewing local high-schoolers in the ‘90s as part of a research project, during which he asked students to identify downtown destinations they’d recommend to visiting friends.

The number one response?

Oddly enough, the old Army Surplus store at the corner of Portage Avenue and Memorial, now the U of W’s Buhler Centre.

“It was an icon of the downtown for a lot of kids,” Distasio explains, noting many Winnipeg teens of the time viewed the odds-and-ends clothing seller as a source of eclectic, unique items they could appropriate for purposes of self-expression.

The cultural shifts that have caused non-inner-city teens to skip the core area are also supplemented by a demographic one.

“A good concentration of that cohort is growing up a lot further from downtown than 20 years ago,” says Distasio.

“They’re even more dislocated. They don’t know what the downtown is anymore.”

According to 2006 City of Winnipeg census data, while 13.3 per cent of Winnipeg’s total population falls between the ages of 10 and 19, only 5.3 per cent of people living downtown belong to the same age range.

Hailey Glor, 17, is among the city’s disproportionate number of teens living outside the core.

While she occasionally makes a trip to the city centre for shopping, when it comes to entertainment and socializing, she and her friends - who enjoy movies and eating out - almost always stick around the South End where she lives, Glor says.

As for why she tends to stay away from the core:

“If I felt safe walking around there at night, I’d probably go more often.”

Are you a Winnipeg teenager who likes to hang out downtown? Head to www.uniter.ca to let us know.