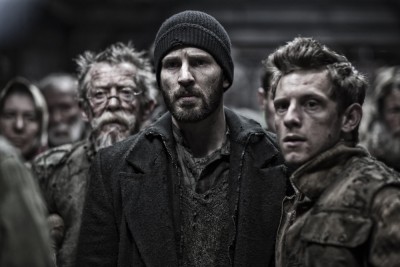 Snowpiercer’s a real conundrum of a film. The description features all the components of a film I’m near-guaranteed to dig: the story goes that all life on earth is killed off due to the unforeseen results of attempting to curb global warming with geoengineering, save for a small percentage who are trapped on a train circling the planet. Mass inequality on the train is rife. Eventually, the oppressed rebel. Violence ensues.

It’s too bad that it’s a mostly awful film. Many glowing reviews speak to different assets. There’s undoubtedly a killer set design, owing much to Bioshock. But beyond that, I disagree with every credit bestowed. The premise is bizarre to the point of distracting, the acting overdone on every count and the script comically poor. It’s a dystopia that relies on spoonfeeding.

The most irksome part is that Snowpiercer is widely regarded as an intellectual’s film. Take the Toronto Star’s review of it, which proclaimed that it’s “so laden with metaphor and symbol it could keep a semiotics class busy for an entire semester.” That’s a disturbingly false claim in both specifics and implication. Snowpiercer is far from delivering a nuanced critique of our collective complicity in the issues it explores.

At the very least, I’m glad that the critical issues of ecological devastation and class warfare are represented in a critically celebrated film. But a significant message can’t outweigh aesthetic merit, the latter of which Snowpiercer possesses little of. The enthused cast can’t save this train wreck of an endeavour; plot holes abound, with shitty dialogue filling any remaining gaps.

I’ll just keep dreaming that the rumoured HBO adaptation of Margaret Atwood’s Oryx and Crake from director Darren Aronofsky will come to fruition and remind us what an artistic morality tale that actually respects its audience looks like. Bring on the pigoons.