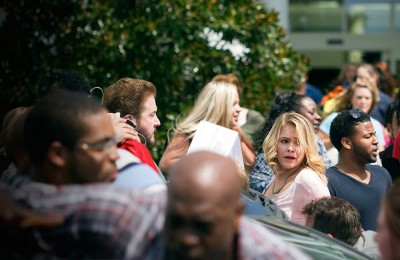 Who knows what the fuck Nicolas Cage was thinking when he took this gig on. For those not raised in evangelical Christian circles - and please consider yourself lucky - a brief history is in order: Left Behind was originally a series of 16 novels that told of the time when Jesus would suck all the people who believe in him up to heaven and release literal hell upon the infidels. The grand event was called the Rapture. People still believe this.

Three Left Behind films were released in the early 2000s. They went straight to DVD. I own the first two, but let’s not talk about that. The debut flick allegedly drew over $4 million in limited box office release, so maybe that’s why Cage and Co. decided to partake in a $16 million campaign to resurrect the series. But goddamn, this movie is just awful. Where to begin?

The acting’s beyond disgraceful; Cage is by far the most convincing of the bunch. There’s no surprise that a confirmation bias is present, considering the evangelical purpose of Left Behind, but the excessively black-and-white nature of it all is sickening. At one point, Cage’s daughter proclaims that her mother (who was raptured) knew all along that this specific event would happen. That certainly ain’t in the Bible.

But Left Behind (which already has confirmed two sequels) isn’t about or for a group that’s interested in what the original text says. The youth groups and church groups that attend theatres across the continent - let’s be serious, across Texas - want to watch a movie that justifies their hyper-consumptive existences, a lifestyle that has no real-world consequences. Cage is just the icing on a very fucked-up cake.

On the bright side, Left Behind can serve as the inspiration for an excellent drinking game. Keep track of the number of Bible verses quoted or referenced. Note the anguished faces that Cage makes. Just make sure that your liquor cabinet’s well stocked.