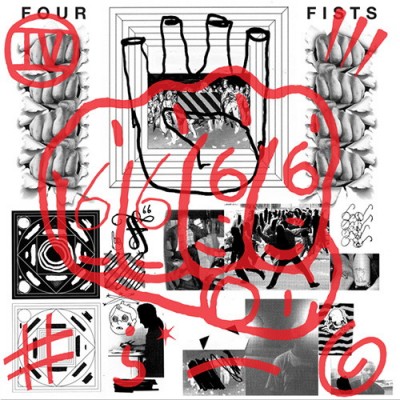 Released October 6 by Minneapolis-based Doomtree Records, 6666 is the first small outing from the eagerly anticipated collaboration between indie rap favorites P.O.S. and Astronautalis. While the two emcees have made guest appearances on each others’ albums in the past, their new moniker, Four Fists, marks their solidification as an official duo.

When I said the record was small, I meant it. The EP sports a modest two tracks; “MMMMMHMMMMM” and “Please Go”, plus the respective instrumentals. Though seemingly pointless to release such a minuscule offering, it’s understandable given both musicians’ recent (and very serious) health problems.

The songs themselves are tantalizing examples of how glorious a full length record from these two will be. Astro is a master of interweaving his irreverent yet captivating vocals with poetic social commentary, while P.O.S.’s anarchically-charged lines are as sharp as they’ve ever been. The components work together to deliver a compelling sound.

The only real problem with Four Fists’ EP is that there isn’t enough of it!