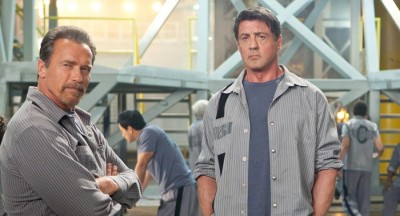 If there was a poll regarding the best action heroes in the history of film, the #1 and #2 spots would most likely go to Sylvester Stallone and Arnold Schwarzenegger. They epitomize the North American ideals regarding masculinity; competitive, muscular and totally machismo. Combined they have starred in over 100 action movies, including collaborations with each other in The Expendables franchise as well as everyone’s favourite ‘90s celebrity-owned restaurant chain, Planet Hollywood. Escape Plan is their third film collaboration and proves to be incredibly thrilling.

Stallone stars as Ray Breslin, a master of structural security. He has analyzed every maximum security prison in the world and has the utmost confidence that he is able to escape from them. When he’s framed and imprisoned in a master jail that he himself designed, he not only needs to unleash his inner Houdini, but also find the man who put him behind bars.

Most people in their late 60s have retired and don’t plan on doing extremely strenuous activity, but Stallone and Schwarzenegger are not “most people”. At 66 and 67 they are still making physically demanding action movies and, truthfully, they are quite good at it. In Escape Plan both their personalities shine onscreen, they are very likeable people and they have great chemistry with each other. Escape Plan is a fun action movie that never ceases to entertain, and for a popcorn flick it’s exactly what you can expect.

At the same time, it is unfortunate that the film is exactly what you can expect.  It’s almost a rehash of the same action movie we’ve seen a million times from the ‘80s and ‘90s. There are cheesy one-liners, one dimensional villains, poor dialogue, Mortal Kombat-esque techno music during the fights, and the standard action scenes which don’t leave us in awe like they should. Though Stallone and Schwarzenegger do a good job at making us forget that they’re technically seniors, it can come off as a desperate attempt to hold onto their youth.